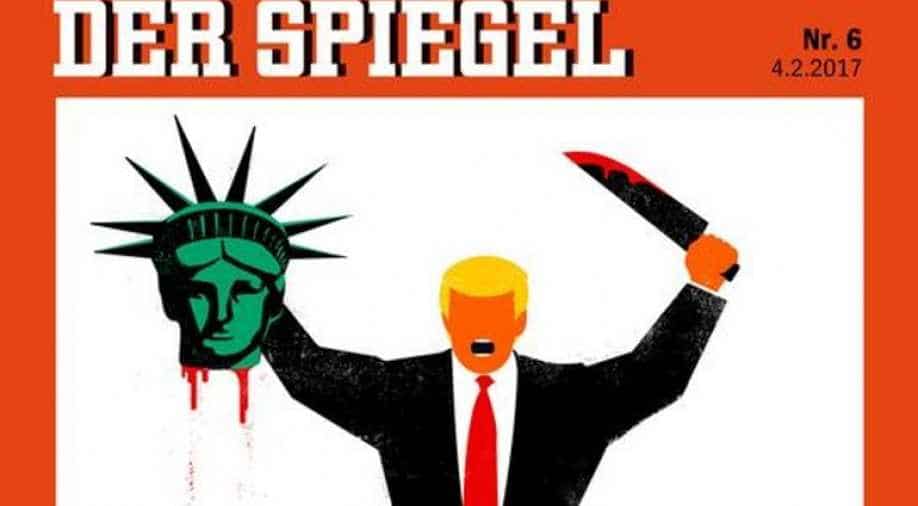 President Donald Trump is depicted beheading the Statue of Liberty in this illustration on the cover of German news magazine Der Spiegel. Photograph:( Reuters )

German weekly magazine Der Spiegel sparked controversy at home and abroad on Saturday with a front cover illustration of US President Donald Trump beheading the Statue of Liberty.

The cover depicted a cartoon figure of Trump with a bloodied knife in one hand and the statue's head, dripping with blood, in the other with a caption: "America First".

The artist who designed the cover, Edel Rodriguez, a Cuban who came to the United States in 1980 as a political refugee, told The Washington Post: "It's a beheading of democracy, a beheading of a sacred symbol."

The cover set off a debate on Twitter and in German and international media, with Alexander Graf Lambsdorff, a member of Germany's Free Democrats (FDP) and vice-president of the European Parliament, describing it as "tasteless".

"The impact actually surprised me, that this cover was held high at demonstrations, that many in the American media put it on the front page or the first place of their website. This impact surprised me. That it would get attention, I expected," the editor-in-chief observed.

The cover follows a series of attacks on Berlin's policies by Trump and his aides, marking a rapid deterioration in German relations with the United States. Chancellor Angela Merkel was the go-to European ally for former US President Barack Obama, who praised her as "an outstanding partner". However, a lot has changed since then. Last month, Trump said Merkel had made a "catastrophic mistake" with her open-door migration policy, and this week his top trade adviser said Germany was using a "grossly undervalued" Euro to gain advantage over the United States and its European partners.

Meanwhile, Trump's policies, especially the travel ban imposed on seven mainly Muslim countries sparked protests across Europe including in New York and Washington even as the appeal was rejected by a federal judge. In London an estimated 10,000 people turned out, chanting "Theresa May: Shame on You" to denounce the British prime minister's support for the American president.

Trump's executive order last week put a 120-day halt on the US refugee programme, barred Syrian refugees indefinitely and imposed a 90-day suspension on people from seven majority Muslim countries - Iran, Iraq, Libya, Somalia, Sudan, Syria and Yemen. But a US court in a ruling denied a request from the US Department of Justice to immediately restore Trump's order. In Iraq, a government spokesperson said, "It is a move in the right direction to solve the problems that it caused."