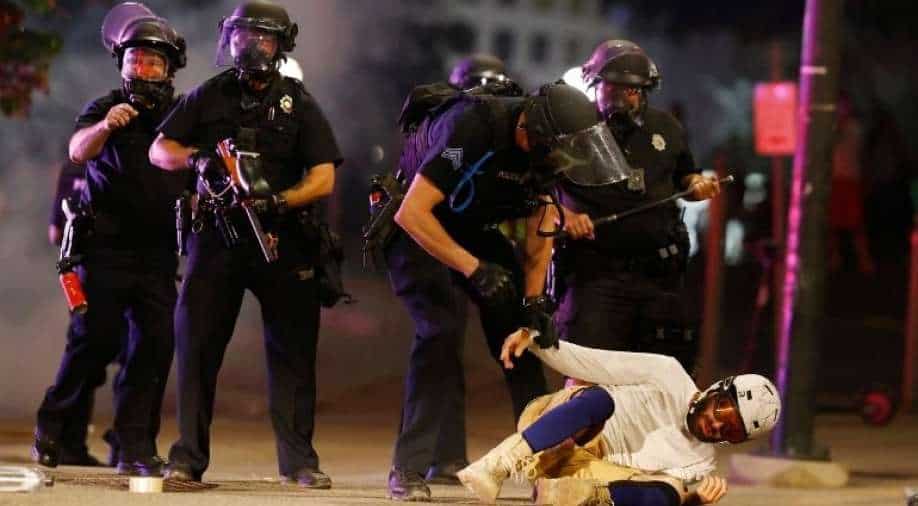 In this file photo, Denver police can be seen during a crackdown on demonstrations over the killing of George Floyd. Photograph:( AFP )

Floyd's death, which was filmed by a bystander in a video that went viral, sparked months of protests against racial injustice and police brutality in the United States and around the world

A jury has awarded $14 million in damages to protesters over the actions of police in Denver during demonstrations over the killing of George Floyd two years ago.

One of the protesters' lawyers, Timothy Macdonald, had urged jurors to send a message to police in Denver and elsewhere by finding the city liable during closing arguments.

“Hopefully, what police departments will take from this is a jury of regular citizens takes these rights very seriously," he said after the verdict.

Last year Minneapolis police officer Derek Chauvin, who is white, was convicted of murder and jailed for 22 years over the death of African American George Floyd during an arrest.

Floyd's death, which was filmed by a bystander in a video that went viral, sparked months of protests against racial injustice and police brutality in the United States and around the world.

Three former Minneapolis police officers were found guilty on Thursday of depriving Floyd of his rights by failing to give aid to the handcuffed Black man pinned beneath a colleague's knee.

The jury also found that the conduct of officers Tou Thao, 36; J. Alexander Kueng, 28; and Thomas Lane, 38, caused Floyd's death, a finding that can affect the severity of their sentence.

Speaking to reporters after the verdict, Brandon Williams, Floyd's nephew, called it a "small victory."

"Often times, you know, officers kill Black and brown men and women and we get little to no consequences," Williams said. "A lot of times, we don't even get charges, let alone a conviction."

The case hinged on questions about when an officer has a duty to intervene in another's misconduct. It is a rare instance of police officers being held criminally responsible for a colleague's excessive force.

All three men will remain free on bail pending their sentencing hearing, which has yet to be scheduled.

Federal prosecutors argued in US District Court in St. Paul that the men knew from their training and from "basic human decency" that they had a duty to help Floyd as he begged for his life before falling limp beneath the knee of the defendants' former colleague, Derek Chauvin.