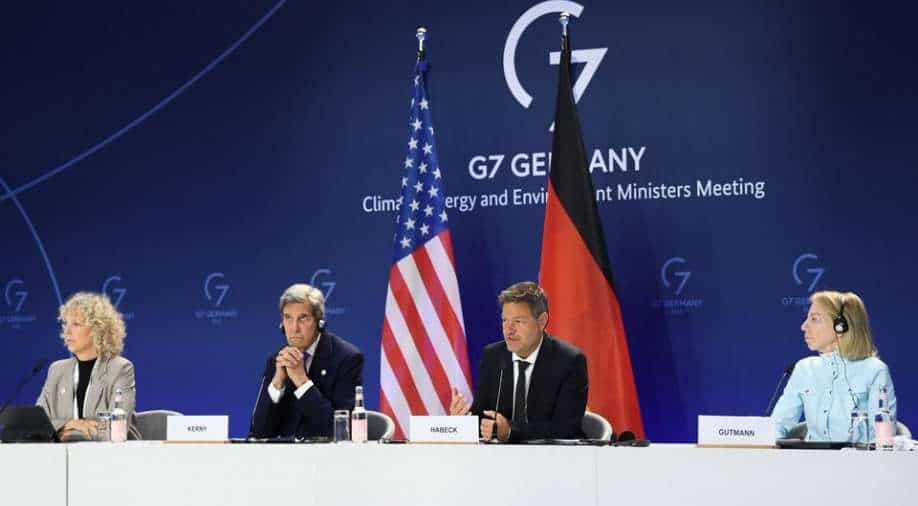 The environment ministers from the Group of 7 (G7) wealthy countries pledged to curb the use of coal and other fossil fuels for power generation, with the aim of eventual and complete phaseout. However, they have not set a cut-off date on when they would do.

They also said that the energy crunch caused by the Russia-Ukraine war should not derail efforts to fight climate change.

The G-7 countries— Germany, Britain, France, Italy, Japan, Canada and the US— who met in Berlin, also announced a target to have a “highly decarbonised road sector by 2030,” paving the way for zero-emission/ e-vehicles to dominate the sales by the end of the decade.

They also assured to take "concrete and timely steps towards the goal of an eventual phase-out of domestic unabated coal power generation."

Reuters, citing sources familiar with the discussions, claimed that Japan and the United States have indicated that they could not support that date.

The G7 also aimed to start reporting publicly next year on how the countries are delivering on a past commitment to end "inefficient" fossil fuel subsidies by 2025.

The joint communique also urged countries against locking in fossil fuel subsidies designed to weather the impact of the conflict.

"In view of the Russian attack on Ukraine, financial support for companies and citizens affected by severely rising prices for fossil fuels is now on the political agenda for several countries," it said.

"Nevertheless, we aim for our relief measures to be temporary and targeted and we reaffirm our commitment to the elimination of inefficient fossil fuel subsidies by 2025."

Germany, which is the current chair of the G7, has asserted that finding alternative fossil fuels would not happen at the expense of environmental goals.

The phasing-out issue is likely to be taken up later this year at a meeting of the Group of 20 leading and emerging economies, who are responsible for 80 per cent of global emissions. The G20 will meet in Bali in November.