G7 leaders vow to end 'race to bottom' on taxes 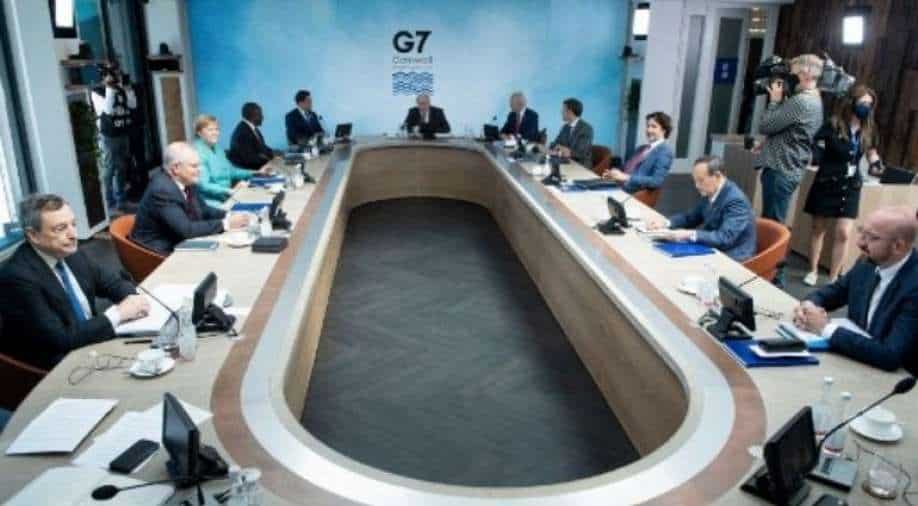 A general view of G7 leaders and their guests is pictured at a working sesssion during the G7 summit in Carbis Bay, Cornwall on June 12, 2021. Photograph:( AFP )

At a summit in southwest England, G7 leaders endorsed an agreement struck by their finance ministers last week to adopt a minimum floor for corporation tax of 15 per cent

The G7 on Sunday advanced a plan to impose a global minimum corporation tax and a collective crackdown on avoidance, arguing it would help tackle inequality.

At a summit in southwest England, G7 leaders endorsed an agreement struck by their finance ministers last week to adopt a minimum floor for corporation tax of 15 per cent.

"With this, we have taken a significant step towards creating a fairer tax system fit for the 21st century, and reversing a 40-year race to the bottom," the G7 said in their concluding statement.

"Our collaboration will create a stronger level playing field, and it will help raise more tax revenue to support investment and it will crack down on tax avoidance."

The proposal, which now goes to the meeting of the G20 nations in Italy next month, is aimed at snaring more taxes from revenue-hopping multinational companies, especially tech giants.

US President Joe Biden, who had proposed the minimum rate, welcomed its backing by his fellow leaders from Britain, Canada, France, Germany, Italy and Japan.

"Too many corporations have been engaged in what are essentially tax savings, deciding that they would pay considerably less in other environments around the world," Biden told reporters after the G7.

"But this is going to make sure there is a minimum tax and I'm going to move on this at home as well.

"And this agreement is going to help arrest the race to the bottom that has been going on among nations protecting corporate investment at the expense of priorities like protecting our workers and investing in infrastructure," he said.

G7 members Britain, France and Italy have already imposed their own special "digital services tax" to recoup more revenue from where tech companies have been generating their pandemic-fuelled sales.

US behemoths including Apple, Facebook and Google have been booking their European profits entirely in Ireland, where the effective corporation tax rate is just 12.5 per cent.

But the G7 trio has indicated they will drop the unilateral taxes if a broader agreement is reached at the G20, which includes China, and at the Organization for Economic Cooperation and Development.

While winning the rest of the G7 over to his plan, Biden still faces resistance in the US Congress, where Republicans are leery of the Democrat's ambitious tax-and-spend plans.

'Men are from Mars, women are from Venus', which one should humans visit first?