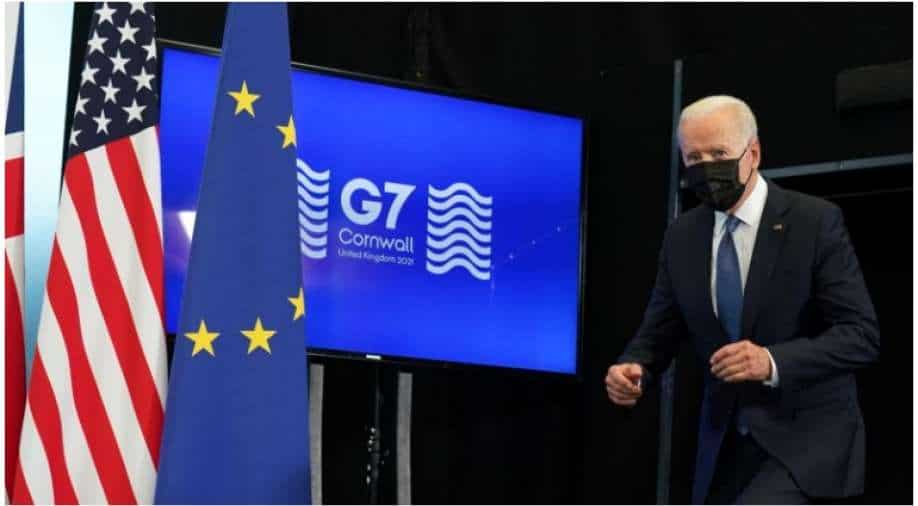 US President Joe Biden arrives for a news conference at the end of the G7 summit, at Cornwall Airport Newquay, Britain, June 13, 2021 Photograph:( Reuters )

Joe Biden argued that the world's richest democracies faced existential contest from "autocrats". This, he said would define 21st century

US President Joe Biden on Sunday said that 'autocrat' Vladimir Putin was right to suggest that relations between USA and Russia were at their lowest. Biden suggested that Russia might be weaker than it seemed.

Joe Biden argued that the world's richest democracies faced existential contest from "autocrats". This, he said would define 21st century.

Biden is scheduled to attend NATO summit on Monday. He will then meet Putin in Geneva on June 16. The meeting of the two presidents is likely to be a combative encounter given the disputes between the two countries over spying, hacking, election meddling, Ukraine, Belarus and human rights

Biden, who called the former KGB spy a killer in March, cast Russia as engaging in unacceptable behaviour on a range of fronts but also pointed to Russia's own "dilemmas" - its post-Soviet economic collapse, what he called overreach in Syria and problems with COVID-19.

Asked why Putin, who has served as Russia's paramount leader since Boris Yeltsin resigned in 1999, had not changed despite years of Western sanctions, Biden quipped: "He's Vladimir Putin".

"Autocrats have enormous power and they don't have to answer to a public and the fact is that it may very well be if I respond in kind, as I will, that it doesn't dissuade him - he wants to keep going," Biden said of Putin.

The two former Cold War foes have had a turbulent relationship for years though relations soured after Putin sought to rebuild some of the clout lost in the chaotic 1991 Soviet collapse and began meddling far beyond Russia's borders.

U.S. and other Western leaders now see Putin and Xi Jinping's China as their main strategic threats, though the Kremlin dismisses as fiction almost all allegations against Russia and says the West is gripped by anti-Russian hysteria.