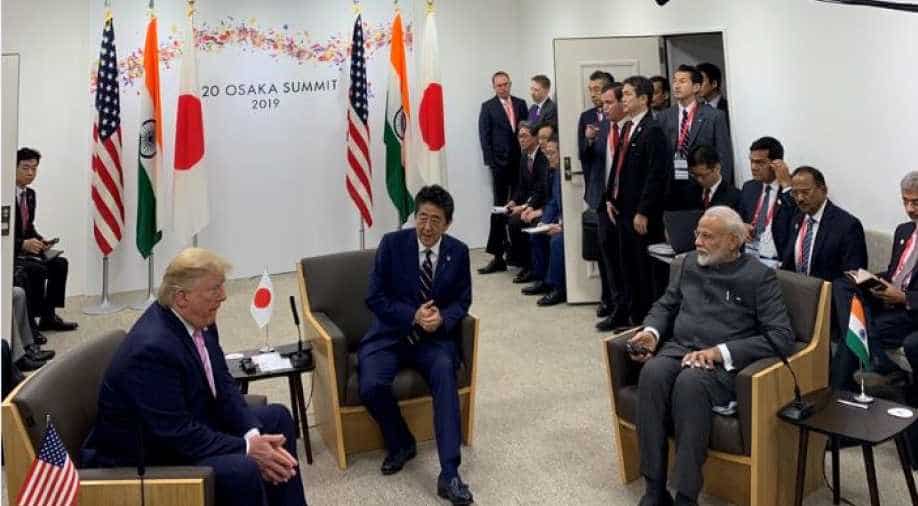 Warning that there are growing risks to the global economy, leaders of the group of 20 major economies on Saturday called for a free and stable trade environment and reform of the World Trade Organisation (WTO).

The G20 bloc said it will play a lead role in the global efforts to prevent fight against corruption by denying safe haven to persons sought for corruption and "work more closely" on asset recovery cooperation.

The group also agreed to apply the recently amended Financial Action Task Force (FATF) Standards to virtual assets and related providers for anti-money laundering and countering the financing of terrorism.

"...growth remains low and risks remain tilted to the downside. Most importantly, trade and geopolitical tensions have intensified. We will continue to address these risks and stand ready to take further action," the G20 leaders said in a declaration at the end of a two-day summit held here.

The group decided to step up "dialogue and actions to enhance confidence" and use all policy tools to achieve strong and inclusive growth and safeguard against downward risks.

In order to foster global economic growth, the group said, "We strive to realize a free, fair, non-discriminatory, transparent, predictable and stable trade and investment environment, and to keep our markets open".

Emphasising the need to improve the functioning of the WTO, the G20 members decided to work constructively with other trade body members in the run-up to the 12th WTO Ministerial Conference.

"We agree that action is necessary regarding the functioning of the dispute settlement system consistent with the rules as negotiated by WTO members. Furthermore, we recognize the complementary roles of bilateral and regional free trade agreements that are WTO-consistent. We will work to ensure a level playing field to foster an enabling business environment," the declaration said.

To enhance cooperation, the G20 members called for carefully calibrated macroeconomic and structural policies "tailored to country-specific circumstances" to address excessive current account imbalances and mitigate the risks to achieving the G20 goal of strong and inclusive growth.

Stating that cross-border flow of data and information was raising challenges of privacy, security and intellectual property rights, the G20 stressed on continuing addressing these issues besides respecting the legal frameworks, both domestic and international.

The group decided to work on advancing elements to develop infrastructure as an asset class, including by exploring possible indicators on quality infrastructure investment, the declaration said.

Calling on the International Monetary Fund to expedite its work on its resources and governance reform on a priority basis, the G20 urged the IMF and World Bank Group to continue their efforts to strengthen borrowers' capacity in the area of debt recording, monitoring and reporting among others under their multi-pronged approach.

The group further said that it will redouble its efforts for a consensus-based solution on tax challenges arising from digitalisation with a report by 2020.

"We call on all jurisdictions to sign and ratify the multilateral convention on mutual administrative assistance in tax matters. We reiterate our support for tax capacity building in developing countries," the declaration said.

Stating that crypto-assets do not pose a threat to global financial stability at this point, the members said, however, "we are closely monitoring developments and remain vigilant to existing and emerging risks".

To tackle corruption, the group said it is committed to implement the G20 Anti-Corruption Action Plan 2019-2021 and intensify efforts to combat foreign bribery and ensure that each member in the bloc has a national law in force for criminalising foreign bribery as soon as possible.