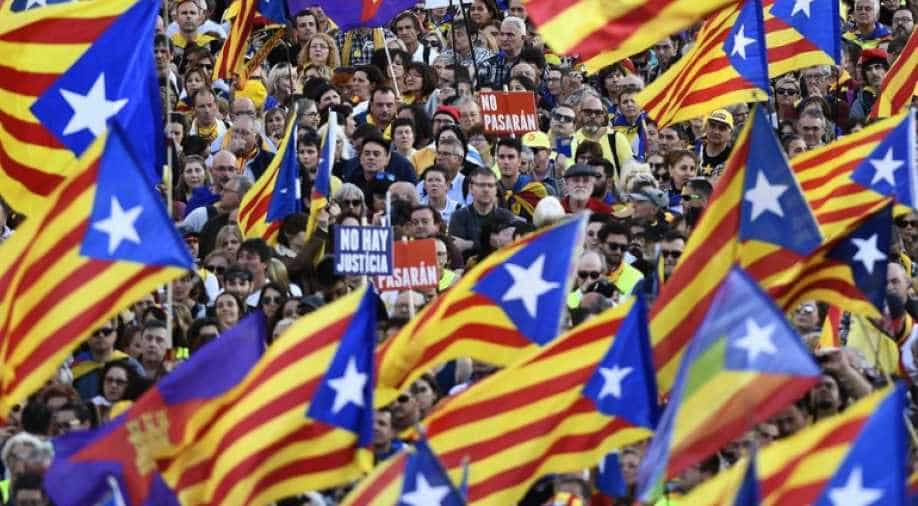 Catalan separatists on Tuesday blocked streets and train tracks in protest against Spain's jailing of nine of their leaders.

Catalan separatists on Tuesday blocked streets and train tracks in protest against Spain's jailing of nine of their leaders, a day after activists stormed Barcelona airport in an angry response to the verdict.

Pro-independence groups called for demonstrators to hold sit-ins from 1700 GMT outside of Spanish government offices in Barcelona and other Catalan cities as part of Tuesday's protests.

Several roads were cut across the northeastern region, including the AP-7 which links Barcelona to France near the separatist stronghold of Girona, local officials said.

Demonstrators also blocked train tracks with burning tyres and other debris as they awaited new instructions from Democratic Tsunami, the group which coordinated Monday's mass bid to swarm the city's El Prat airport, where they choked-off road and rail access.

Activists engaged in running battles with riot police as they sought to enter the terminal but were repeatedly rebuffed, with police staging multiple charges and firing foam rounds into the crowds in a standoff which forced the cancellation of 110 flights, airport officials said.

Although life was slowly returning to normal at the airport after a night in which hundreds of people were stranded at the terminal, another 45 flights were cancelled on Tuesday morning, Spanish airport authority AENA said.

Monday's ruling unleashed a day of chaos, with Catalan separatists enraged by the Supreme Court's decision to hand heavy prison sentences of between nine and 13 years to leaders convicted of sedition over the 2017 referendum and short-lived declaration of independence.

The emergency services said 131 people were injured in the protests, 115 of them at the airport, with the rest in Barcelona and elsewhere. One protester sustained a serious eye injury, hospital officials said.

The separatist movement has made clear there will be no let-up in their protests over the verdict which came as Spain counts down to a November 10 general election, its fourth in as many years, putting the Catalan question at the heart of the political debate.

Around 10,000 people took part in the demonstration at the airport, according to the interior ministry.

Many people took the day off to join the protests, heeding widespread calls on social media to "Turn Catalonia into the new Hong Kong" and raise international awareness of the crisis in this wealthy northeastern region of Spain. Hong Kong has been rattled by weeks of pro-democracy street protests.

"For me, the worst thing is Europe, which hasn't said anything. That's why we're doing this, to cause the worst possible disturbance, so it affects everyone, to see if they realise and do something," IT consultant Carles Navarro told AFP.

"We have always chosen peaceful ways (of fighting for what we believe in) but nobody listens. Now we're forced to go down the route of civil disobedience."

In a message to its 150,000 followers on the Telegram messaging app, Democratic Tsunami directed activists to head for the airport.

"The time has come to make our voice felt around the world. The goal: stop the activity of Barcelona's airport," it said in a call heeded by thousands.

So far, those behind the movement remain unknown but Spanish Interior Minister Fernando Grande-Marlaska said investigators were trying to identify them.

"I have no doubt we will end up finding out who's behind Democratic Tsunami," he told Spain's RNE public radio.

Spain's government has expressed hope the trial's end would allow it to move on from the crisis in Catalonia, where support for independence has gained momentum over the past decade.

But the Catalan separatists, who control the regional government and last month passed a motion in their parliament granting legitimacy to civil disobedience, have shown little willingness to talk.

While Catalan president Quim Torra has encouraged Catalans to exercise civil disobedience, his government is also responsible for the regional police who are charged with controlling demonstrations, putting him in an uncomfortable position.

This "contradiction" is "one of the difficulties of this process," Torra said Tuesday.

In the coming days, protesters are planning to stage marches from five Catalan towns towards Barcelona where they will gather on Friday when unions have called a general strike. Students are also planning to rally in Madrid on Wednesday.