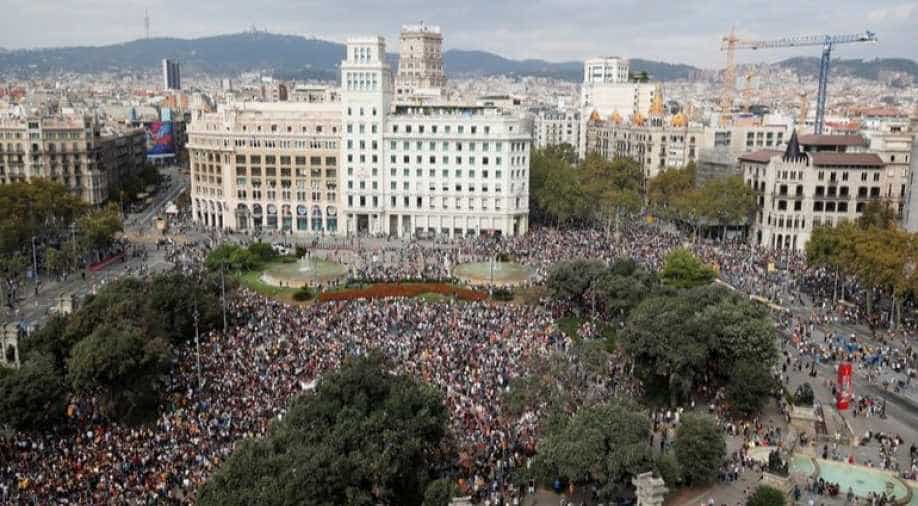 Tension gripped Barcelona on Monday morning ahead of the ruling, with a heavy police presence outside the courts, the airport and the city's main train station, as a helicopter flew overhead

"They have been convicted for an ideology which I agree with."

Within minutes of the ruling demonstrators had poured onto the streets of the Catalan capital, waving flags and blocking traffic over the conviction of the separatist leaders who organised a 2017 referendum banned by Madrid.

"We have to mobilise and stick up for them ... in a way that has an impact, closing airports, stations, but always avoiding violence," Guich said. "Or at least, it won't be us that provokes it."

Workers rallied outside their offices, university students walked out of classes and regional lawmakers demonstrated inside Catalonia's parliament, where most of the defendants had held a senior role.

"Today is going to be historic, you can feel it in the atmosphere. Serious things are happening, we can't stay home," said Oscar Quiles, a 47-year-old real estate entrepreneur.

News of the verdict reached him as he arrived at the office and he immediately called his mother to join him at a protest in Plaza Cataluna in the centre of Barcelona.

By noon the square was packed with thousands of demonstrators, many waving yellow, red and blue Catalan separatist flags or banners reading "We would do it again" and "Freedom for political prisoners".

The protesters then set off walking towards Barcelona's airport, Spain's second busiest, in the hope of blocking it, just as pro-democracy activists have done recently in Hong Kong.

Tension gripped Barcelona on Monday morning ahead of the ruling, with a heavy police presence outside the courts, the airport and the city's main train station, as a helicopter flew overhead.

Democratic Tsunami, a group advocating more active forms of civil disobedience, had urged demonstrators to hit the streets as soon as the verdicts were announced.

"Tomorrow everyone ready! When the verdict is out, the response will be immediate," said the group in a message to its roughly 150,000 followers on mobile messaging service Telegram.

"Now all we have left is a life of civil and institutional disobedience," he told AFP, predicting "weeks of mobilisation".

The Catalan National Assembly (ANC) and Omnium Cultural, the region's two biggest grassroots pro-independence groups, have also called supporters to attend an evening rally. They have organised some of the largest separatist protests in recent years.

Several more protests are scheduled over the next few days across Catalonia, as well as a general strike on Friday.

Democratic Tsunami, the group that called the gathering in Plaza Cataluna, only emerged in recent weeks. It says it does not depend on Catalan separatist parties or civil associations for support.

Its leaders remain unknown, keeping in touch with each other through encrypted messaging apps such as Wire.

But supporters tend to be kept in the dark until the last minute.

"We don't know exactly what we have to do," said Arnau Font, a 22-year-old shop assistant who took the week off to protest.

"We have to get involved. Right now I feel really powerless in light of the verdicts," he told AFP.

The uncertainty was over a few minutes later when a Telegram message arrived urging everyone to "go to the airport", a 15-kilometre (nine-mile) walk from the city centre.

"The time has come to make our voice felt around the world. The goal: stop the activity of Barcelona's airport," it said.

Spain's airport operator Aena said no flights were disrupted, but many passengers got stuck in traffic jams leading to the airport.