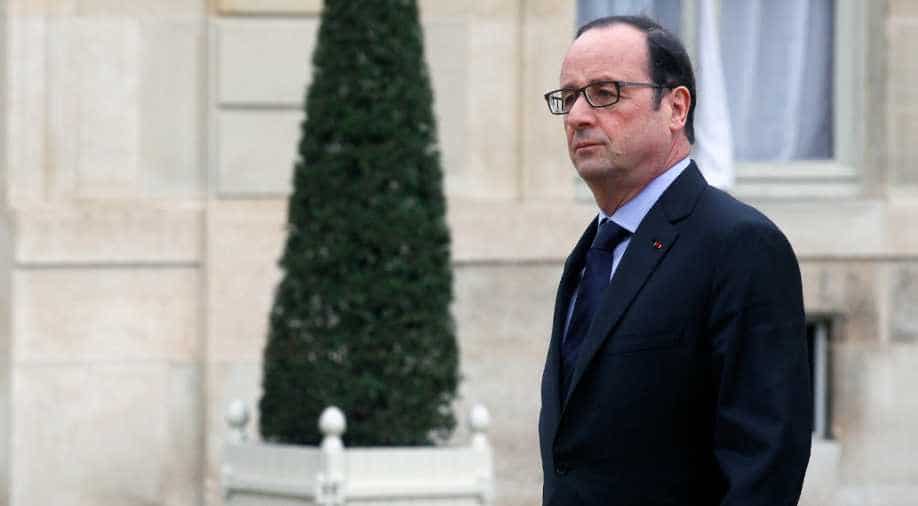 Hollande's popularity had hit rock bottom after a term in office marked by U-turns on major policies, terror attacks, high unemployment and embarrassing revelations about his private life. Photograph:( Getty )

French President Francois Hollande announced Thursday he would not seek re-election next year as he bowed to historically low approval ratings after a troubled five years in power.

The 62-year-old Socialist leader put a decisive end to speculation in a solemn televised statement from the Elysee Palace in Paris.

"I have decided that I will not be a candidate," Hollande said.

"In the months to come, my only duty will be to continue to lead my country."

Hollande's popularity had hit rock bottom after a term in office marked by U-turns on major policies, terror attacks, high unemployment and embarrassing revelations about his private life.

A new poll on Wednesday predicted he would win just 7.0 per cent of votes in the first round of next year's election in April -- strengthening critics in the Socialist party who view him as a lame duck.

But with the full range of candidates still unknown and the role of independents such as 38-year-old ex-minister Emmanuel Macron difficult to predict, analysts urge caution about the forecasts.

Hollande's withdrawal leads the field open for France's divided ruling Socialist party which began accepting candidates on Thursday for a party primary race due on January 22 and 29.

Hollande, who has some of the lowest approval ratings for a French president since World War II, came to power after defeating rightwing president Nicolas Sarkozy in 2012.

He took office promising to be "Mr Normal" after what were seen as the excesses of the years under Sarkozy, who married supermodel Carla Bruni and was often pictured with millionaire friends.

But his presidency has been anything but normal.

France has faced three major Islamist-inspired terror attacks since January 2015 -- firstly against the Charlie Hebdo magazine, then in Paris in November and in Nice in July.

On economics, Hollande started with a leftist programme that included a wealth super-tax of 75 percent on top-earners but he shifted course mid-way through his term to embrace pro-business reforms.

And his colourful personal life has never been far from the headlines, leading his opponents to claim he has demeaned one of the most powerful political offices in Europe.

In January 2014, celebrity magazine Closer published pictures of him arriving on a scooter at an apartment near his official residence for secret trysts with a French actress, Julie Gayet.

The revelations led to the break-up of Hollande's relationship with partner Valerie Trierweiler, who went on to write an eviscerating book which claimed the president mocked poor people as "the toothless".

The left-leaning Le Monde newspaper had more harsh words on Thursday for the president, whose leadership was described as "pathetic" by Republicans' candidate Fillon at the weekend.

Le Monde wrote in an editorial that the Socialists risked tearing themselves apart ahead of the presidential election in April and May and parliamentary polls in June.

"The person who is most responsable is Francois Hollande, who has not given a meaning to his time in office, occupied the job with authority or imposed himself as the legitimate candidate for his party," it said.

And there could be more bad news to come.

Hollande's embittered former aide Aquilino Morelle has announced a tell-all book to be published around the same time as the primary about the president's first few years in power.

Its title? "The Abdication".