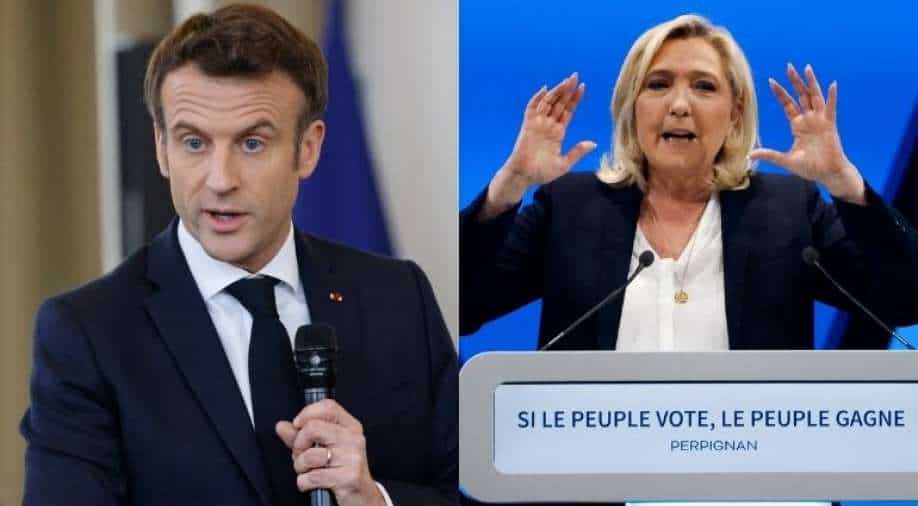 Although Macron is currently leading in polls with Le Pen behind him, several surveys now say this is within the margin of error

President Emmanuel Macron has accused his opponent in the French election, Marine Le Pen of running a racist programme. He was referring to her proposal of imposing a fine on any woman wearing the Islamic headscarf in public.

Leader of the French far-right National Rally (Rassemblement National) party, the anti-immigration, eurosceptic far-right Le Pen has boosted her ratings in the opinion polls by a months-long focus on the cost of living issues.

Macron told Le Parisien newspaper, "Her fundamentals have not changed: it's a racist programme that aims to divide society and is very brutal."

"Look at what happened with Brexit, and so many other elections: what looked improbable actually happened," he added.

Macron said, "Mrs Le Pen is financially dependent on Mr Putin and his regime and has always showed complacency towards him."

"Nothing is taken for granted... (but) I have a spirit of conquest more than a spirit of defeat."

Rejecting the allegation, Le Pen said her policies would benefit all French people, independently of their origins.

During a rally, in which her supporters chanted "We will win! We will win!", she said "We are ready, and the French are with us."

She urged French citizens to cast a ballot for her to deliver "the fair punishment which those who have governed us so badly deserve."

Political analysts believe that Macron's focus on an unpopular plan to increase the retirement age along with a steep rise in inflation have dented the president's ratings.

Although Macron is currently leading in polls with Le Pen behind him, several surveys now say this is within the margin of error

Macron had easily Le Pen in the 2017 run-off. If he wins again, he will be the first French president since Jacques Chirac in 2002 to get re-elected.

Russia has captured Lysychansk, has control over Luhansk: Defence minister

Palestinians hand bullet that killed Al Jazeera journalist to US