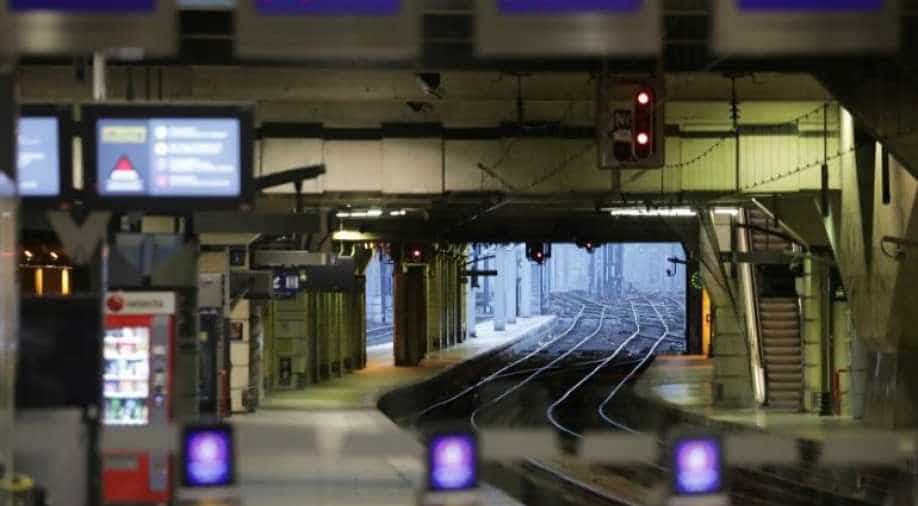 Empty platforms are pictured at Gare Montparnasse train station during a strike by all unions of French SNCF workers and the Paris transport network (RATP), as France faces its eleventh consecutive day of strikes against the French government's pensions reform plans, in Paris, France Photograph:( Reuters )

In a major overhaul of France's complex pension scheme, the government has proposed that people work longer to get a full pension, drawing a hostile response from trade unions which called for a new mass protest on Tuesday

Four branches of France's hardline CGT union, including railway and transport workers, threatened on Sunday to step up protests unless the government withdraws its pension reform proposal this week.

In a major overhaul of France's complex pension scheme, the government has proposed that people work longer to get a full pension, drawing a hostile response from trade unions which called for a new mass protest on Tuesday.

Concern has risen that the travel chaos that has hit the country since December 5. would extend to the year-end period

"The CGT Federations of Railway, Transport, Mines, and Energy, and Chemical Industries say that the Government has one week to announce the withdrawal of its project and the relaunch of real negotiations for the improvement of the current system," the union branches said in a joint statement

"If the Prime Minister persists in affirming that 'the country is disturbed but not blocked', the employees of the public and the private sector will draw the conclusion from this that they must redouble their mobilisation, multiply calls to strike in all companies and further increase the level of protests."

CGT leader Philippe Martinez denied that this was an ultimatum.

"If the government pulls its plan and we discuss seriously on how to improve the system everything will be fine," he told BFMTV. "Otherwise strikers will decide on Thursday or Friday on what to do."

Asked if transport might be disrupted at Christmas, Martinez said: "Today I cannot tell you. The question should be put to the Prime Minister and to the President of the Republic."

By contrast, the reform-minded CFDT union said on Sunday it was opposed to transport strikes over the Christmas period but would call for action in January if the government did not meet some of its demands, chiefly to remove the inducement to work until 64 through a system of bonuses and discounts.

Prime Minister Edouard Philippe told Le Parisien Dimanche weekly that he planned to meet unions next week, adding that he was open to negotiation.

French retailers and hoteliers have warned that their crucial Christmas season could be derailed if the transport strike drags on for much longer.