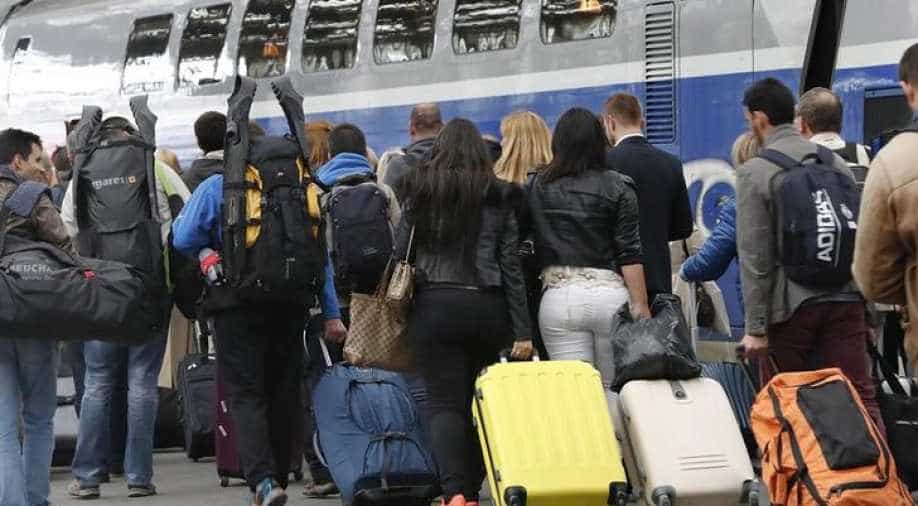 Passengers carry their bags before getting in a train at Gare de Lyon railway station in Paris, France, during a national railway strike by French railway unions workers from the France's rail-operator SNCF, June 2, 2016 Photograph:( Reuters )

Follow Us
France's government, scrambling to end a wave of protests that could disrupt the Euro 2016 soccer championship, called today for an end to the national rail strike and told Air France pilots their plans to stop work were "irresponsible".

The calls came as an open-ended stoppage at the railways entered its third day, reducing train services by about half, a week before the June 10 opening of the soccer tournament which should draw some 2.5 million fans, many of them from abroad.

"It's time to acknowledge the progress that's been made and to get back to work," the minister told RTL radio.

The Socialist government has intervened in internal talks on reorganisation of the SNCF to try to defuse tensions, and made concessions to avert an air traffic controllers' strike. But it now faces a walkout by pilots at flag carrier Air France next week.

"This is irresponsible," the minister said, adding that nobody would understand why a stoppage over planned pay curbs was timed to start one day into the month-long soccer event.

Two unions representing the bulk of Air France pilots have given notice of a strike from June 11 to 14 and said they may schedule further stoppages.

The militant CGT union is spearheading strikes at the state rail company and at refinieries and nuclear power stations in a bid to force the government to withdraw a contested reform of labour laws that would make hiring and firing easier.

The core protest has coincided with sectoral issues such as difficult reorganisation negotiations to prepare the SNCF for Europe-wide liberalisation of train traffic in 2020 and, at Air France, efforts to reduce costs.

Prime Minister Manuel Valls has said the CGT union, one of the two large unions in France, was waging an increasingly lonely war now that most other unions had dropped their grievances.

"If we gave into the CGT, a union which is in the minority even if I respect its history and struggle, it would no longer be possible to reform France," he told l'Est Republicain.