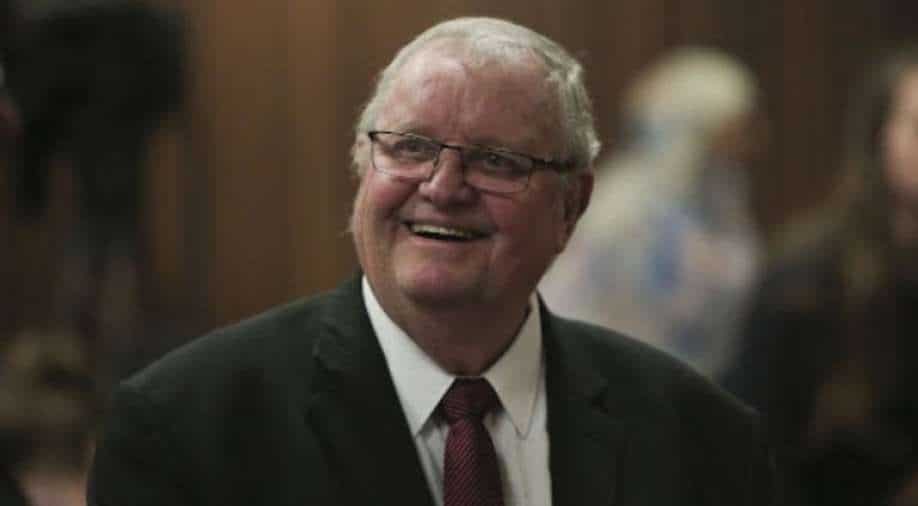 Dutton came to prominence in the early 1990s, a fraught moment between the 1990 release of Nelson Mandela from prison and the 1994 multiracial elections that elevated him to the presidency and officially brought apartheid to a close

Frank Dutton, whose investigations into some of the biggest criminal cases in South African history, from apartheid-era hit squads to more recent high-level government corruption, earned him a reputation as his country’s greatest police detective, died Jan. 20 at a hospital in Hillcrest, South Africa. He was 72.

Howard Varney, a longtime friend and colleague, said the cause was a heart attack following a stroke a few days before.

Dutton came to prominence in the early 1990s, a fraught moment between the 1990 release of Nelson Mandela from prison and the 1994 multiracial elections that elevated him to the presidency and officially brought apartheid to a close.

Dutton, who was white, and his colleague, Lwandle Wilson Magadla, who was Black, were working on a separate case when they uncovered evidence related to the 1988 killing of 11 Black South Africans in Trust Feed, a town in the province of KwaZulu Natal.

Trust Feed was dominated by the Inkatha Freedom Party, a Black activist organization. Initial investigations into the massacre had placed the blame on Inkatha’s rival, the African National Congress, and despite glaring failures by the police — they never interviewed two survivors, for example — a judge had ruled the case closed.

But Dutton and Magadla were convinced that the truth was something far worse: that the murders had been a false-flag operation carried out by a police hit squad in an effort to drive a wedge between the two parties.

“At first I simply did not believe that the police were involved,” Dutton told the British newspaper The Independent in 2000. “I was a loyal party man. But slowly the scales fell from my eyes, and I began to see what the police were really doing.”

The two meticulously unearthed the cover up — identifying false entries in logbooks, interviewing survivors and tracking down two of the men who had participated in the killing — even in the face of official intransigence and death threats.

The ensuing trial, in 1992, was the first to reveal the role of senior officials in police violence against the anti-apartheid movement. Uncovering the full scope of the government’s campaign became Dutton’s life work.

During the 1980s, anti-apartheid activists had often spoken of a so-called third force in South Africa’s law enforcement system, a network of saboteurs, spies, assassins and hit squads that operated outside the law but under the control of the top police authorities. The government denied everything, insisting that it was mere conspiracy-mongering. The Trust Feed case convinced Dutton that the activists were right.

In 1992, he became a lead investigator for the Goldstone Commission, an effort led by Richard Goldstone, a South African judge, to uncover apartheid-era political violence. Dutton soon discovered not just a few bad apples but an entire rotting orchard — top-level police and military officials, sometimes in league with members of the Inkatha Freedom Party, who organized hit squads and espionage campaigns against the African National Congress.

Among other cases, his investigations led to the conviction of Eugene de Kock, a police colonel who during the 1980s oversaw a unit that hunted and killed Black activists.

Dutton continued his work under Mandela, who hired him in 1994 to lead an elite squad of detectives and prosecutors called the Investigation Task Unit, charged with rooting out the remnants of the apartheid state that, even then, were still engaged in anti-Black violence.

Once again, he revealed involvement at the very top, in this case Gen. Magnus Malan, a former minister of defense, who had led a campaign to foment Black-on-Black violence, including the 1987 murder of 13 people in the town of KwaMakhutha.

Despite overwhelming evidence of their guilt, Malan and 19 other senior government leaders were acquitted. The case was roundly seen as a failure of post-apartheid justice, but the mounds of evidence assembled by Dutton and his team did not go to waste. The Truth and Reconciliation Commission, which was established in 1996 to gather testimony about the apartheid era, used it to demonstrate the extent to which the white supremacist government was willing to go to maintain control.

Dutton did more than exhume the past. In the face of mounting crime, President Thabo Mbeki, Mandela’s successor, hired him in 1999 to run a new agency, the Directorate of Special Operations, nicknamed the Scorpions.

Like the Investigation Task Unit, the Scorpions were elite and untouchable. Dutton insisted that applicants have a university degree and be fluent in four of South Africa’s 11 official languages. He also insisted that they operate outside the federal police structure, reporting directly to the national director of public prosecutions. A few months after its founding, the Scorpions scored a $29 million drug bust.

By then Dutton was something of a celebrity in South Africa. He often drew comparisons with a long list of crime fighters, real and fictional: Eliot Ness for his unimpeachability, Frank Serpico for his willingness to take on crooked cops, and the television detective Columbo for his casual, sometimes disheveled demeanor that put witnesses at ease and threw adversaries off their game.

“He was seen as one of the few honest cops with courage and dedication to justice and getting the job done,” said Varney, who as a human rights lawyer worked closely with Dutton. “As far as I’m concerned, he’s the finest detective that this country has ever produced.”

The South African government agreed. In 2012, Dutton and Magadla, who died the year before, received the Order of the Baobab in Gold, the nation’s highest civilian honor.

Frank Kennan Dutton was born on May 20, 1949, in Bela-Bela, a town about two hours north of Johannesburg, the son of Terry and Dorothy Dutton.

He is survived by his wife, Vanessa; his brothers Tub and Robin; a sister, Polly; a daughter, Sally Ackerman; two sons, Paul and Brian; and seven grandchildren.

Dutton attended Boys’ Town, a school for troubled youth, in Magaliesburg, on the western outskirts of Johannesburg, and joined South Africa’s national police force in 1966. After a year of police college in Pretoria, he was deployed to Natal province (known today as KwaZulu Natal).

Early on he developed a reputation as an assiduous cop unafraid to butt heads with an insular, self-protective leadership. He also stood out for his willingness to partner with Black officers, even in the face of overt discrimination: When he and Magadla went out of town on assignment, they would often sleep in a jail cell, for lack of a hotel that would accommodate both of them.

He later applied his investigative skills internationally. When Goldstone was placed in charge of the United Nations’ investigation into war crimes in the former Yugoslavia in the late 1990s, he brought Dutton along — first, to examine mass graves in Bosnia, then as the lead investigator across the entire region.

After retiring from the police in 2003, Dutton worked as a consultant for the United Nations, a job that took him around the world, investigating sexual abuse in the Congo, human rights violations in East Timor and police corruption in the Seychelles.

In the 2010s, he joined Varney and a small team of lawyers, human rights activists and other investigators to reopen apartheid-era cold cases in which activists had died in police custody, their deaths officially ruled suicides.

The first case involved Ahmed Timol, a communist and ANC member who died in 1971 after falling from a high floor of the main Johannesburg police station. A judge said he died by suicide, despite evidence that he had been tortured. Thanks to Dutton’s work, the case was reopened, and in 2017 another judge ruled it a homicide by the police.

The next year, Dutton returned to investigating government corruption under former President Jacob Zuma as a part of the so-called Zondo Commission. At his death he was preparing to lead an investigation into the commission’s findings.

He was also awaiting a ruling in another high-profile apartheid-era cold case, involving the supposed suicide of Neil Aggett, a doctor and labor activist, in police custody in 1982. His death galvanized the anti-apartheid movement and helped set in motion a wave of activism in the 1980s. The ruling is expected in the coming weeks.