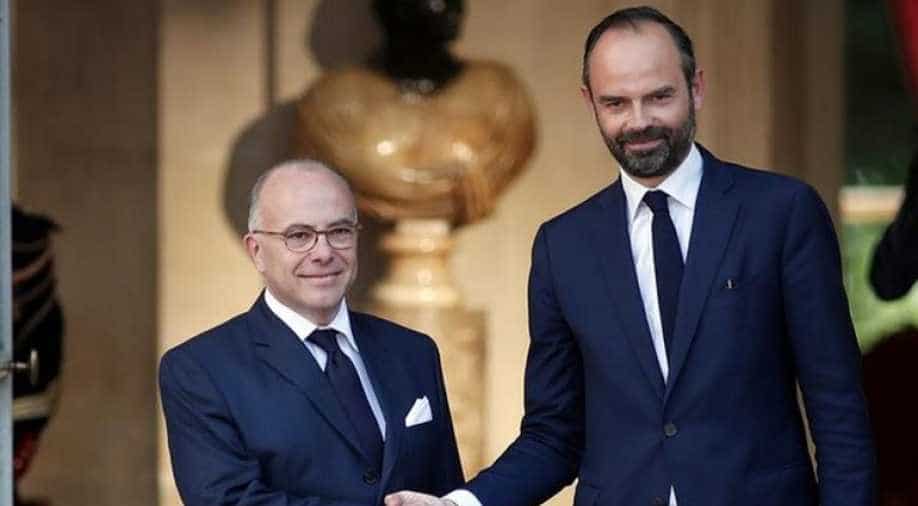 Macron wants to smash the left-right divide which has dominated France for decades, and his start-up centrist Republic on the Move (REM) party, which is just a year old, needs to forge a wide base of support. Photograph:( Reuters )

Newly inaugurated French President Emmanuel Macron appointed a conservative prime minister on Monday in a move to broaden his political appeal and weaken his opponents before parliamentary elections in June.

Edouard Philippe, 46, a lawmaker and mayor of the port city of Le Havre, is from the moderate wing of the main centre-right party, The Republicans, and will provide a counterweight to former Socialist members of parliament who have joined Macron's cause.

Macron wants to smash the left-right divide which has dominated France for decades, and his start-up centrist Republic on the Move (REM) party, which is just a year old, needs to forge a wide base of support.

Success in the parliamentary elections is vital to his chances of pushing through his plans to cut state spending, boost investment and create jobs, after years of economic malaise and high unemployment.

The choice of Philippe is aimed at drawing more defectors from The Republicans, in the same way as Macron's decision not to put up an REM candidate in Manuel Valls' constituency pulls the Socialist former prime minister closer, and makes it hard for a divided left to re-unite.

It is the first time in modern French political history that a president has appointed a prime minister from outside his camp without being forced to by a defeat in parliamentary elections.

Appearing at a handover ceremony with outgoing Socialist prime minister Bernard Cazeneuve, who is also from Normandy, Philippe joked that Normans were "aggressively moderate" as well as "conquerors."

He also described himself as "a man of the right."

Philippe is "a prime minister who will bring everyone together around a progressive, daring, unifying programme," said Gerard Collomb, the Socialist mayor of Lyon and one of the earliest backers of Macron.

By appointing him, Macron has passed over some loyal followers including Richard Ferrand, a former Socialist who was one of the first to join Macron's cause last year and is secretary general of REM.

Christophe Castaner, Macron's campaign spokesman, said on Sunday this was the kind of tough choice that would have to be made in Macron's inner circle now that the battle for the presidential Elysee Palace was won.

The rest of the government is expected to be announced on Tuesday afternoon.

Philippe's nomination is a direct challenge to The Republicans (LR), who say they aim to be the biggest party in the lower house of parliament but are lagging behind REM in the first opinion polls ahead of that ballot.

Members of the party had very different reactions to Philippe's nomination, with loyalists criticising it.

"This is not at all a government coalition but an individual decision. We regret it," LR said in a statement. "He has placed himself outside of our political family," LR secretary general Bernard Accoyer said.

Philippe is a close associate of former prime minister Alain Juppe, who leads LR's moderate wing, and his mentor was more positive. Juppe welcomed the move, wishing him good luck and telling reporters Philippe has "all the qualities needed for this difficult job."

Juppe said he would be backing LR lawmakers in the mid-June elections, and not Macron's candidates. But he added that if LR and its allies did not win a majority in June, voters "would not understand if we systematically opposed everything."

Bruno Le Maire‏, a veteran LR lawmaker who has also been pushing for a rapprochement with Macron, congratulated Philippe on Twitter, saying: "Let's go beyond the old divides to be of use to France and the French people."

Philippe began his political life as a Socialist activist affiliated to former prime minister Michel Rocard while he was a student, before turning to the right.

A trained lawyer, he worked as public affairs director for the state nuclear group Areva between 2007 and 2010, before becoming a member of parliament in 2012, and then mayor of Le Havre in 2014.

Last year he was part of Juppe's unsuccessful campaign team in The Republicans' primaries, and then joined the presidential campaign of Francois Fillon, the party's nominee. Philippe quit that cause when Fillon's campaign was hit by a financial scandal over publicly funded jobs for members of his family.

Philippe, like Macron, attended the elite ENA school, and his political hero is Rocard - another point in common with the 39-year-old new president.

In a May 3 column for left-leaning daily Liberation, Philippe said of Macron: "He'll have to be daring. Step out of the old, comfortable, institutionalised, one-on-one left-right opposition to constitute a majority of a new kind. The path will be narrow. And risky."

He might be less at ease now with a more critical column he wrote mid-January, in which he said Macron was no John Fitzgerald Kennedy, adding that he didn't have JFK's charisma.