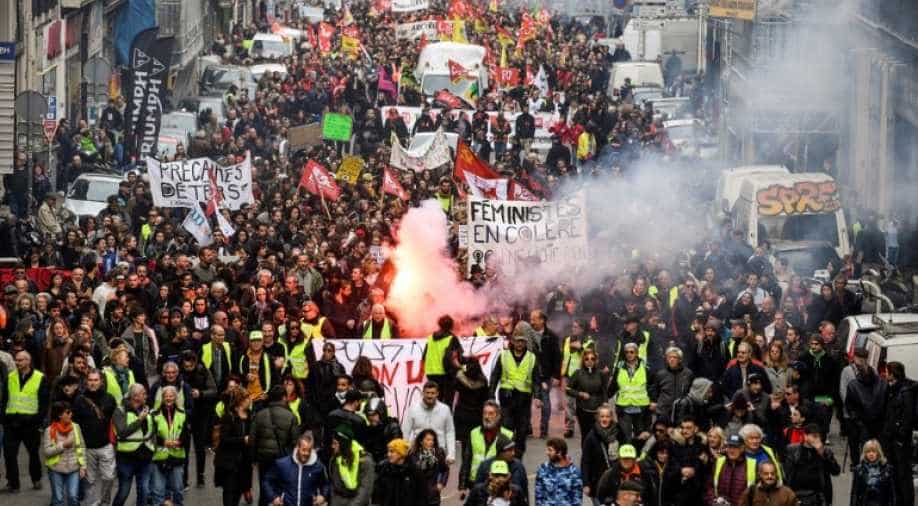 Public support appears to be shifting in the government's favour, with just 44 per cent backing the strike in an Ifop poll released Sunday

French officials prepared to restart talks with unions Tuesday over a pension overhaul that has sparked the country's longest transport strikes in decades, which labour leaders say could force millions of people to retire later than they thought.

Public support appears to be shifting in the government's favour, with just 44 per cent backing the strike in an Ifop poll released Sunday, down seven points from the previous survey on December 19-20.

The reform would eliminate 42 separate pension schemes that offer early retirement and other advantages, mainly to public-sector workers, in favour of a single system.

It would also create a "pivot age" of 64 to benefit from a full pension, penalising those who stop working at the official retirement age of 62 -- one of the lowest in Europe.

The government insists the measure is necessary for ensuring sufficient financing for the deficit-plagued system.

Yet officials have seized on an offer by France's largest union, the moderate CFDT, to hold separate talks on how to finance the plan later, in order to end the impasse over the pivot age.

But the hard-line CGT and Force Ouvriere unions have vowed to derail the plan, urging a new day of mass walkouts against the reform on Thursday, which could see schools shut and public transport even more impacted than usual.

Train operator SNCF says it has lost more than 600 million euros ($670 million) in ticket sales since the strike began on December 5, and Paris commutes have been headaches for millions who rely on the RATP's metro, bus and suburban rail lines.

'We have to hold out'

The CGT has stepped up its protest with a four-day blockade of refineries and fuel depots starting Tuesday, raising the prospect of petrol shortages.

Nurses, physiotherapists and lawyers, among dozens of professions with their own advantageous pension regimes, have also voted for strike actions this week.

But the number of striking rail and metro workers tapered off over the holidays, and the lost pay could make it hard to keep up the protest.

"It's going to be hard but we have to hold out at least until Friday," Mounir, an RATP employee, said Monday as drivers voted to prolong the strike.

Unions say they are relying on reserve funds and donations to limit the financial hit for strikers, in what has been France's longest continuous train strike since the national rail service was created in the 1930s.

President Emmanuel Macron made the pensions overhaul a key plank in his 2017 election campaign, saying a single points-based system would be fairer to women and low-earners in particular.

The government has already made a series of concessions to police and military personnel as well as SNCF workers, allowing them to continue retiring early or keep their separate benefits for several years yet.

But most salaried workers born in 1975 or later would be impacted by the new system, in which people would earn points based on their lifetime earnings, which would be converted into pension payouts upon retirement.

Currently, most pensions are calculated from a worker's 25 best years of earnings -- public workers, however, get payouts based on their last six months of pay, a more favourable base.

An Elabe poll released Monday found that most French (54 percent) support the points-based plan, though two-thirds oppose the pivot age of 64.