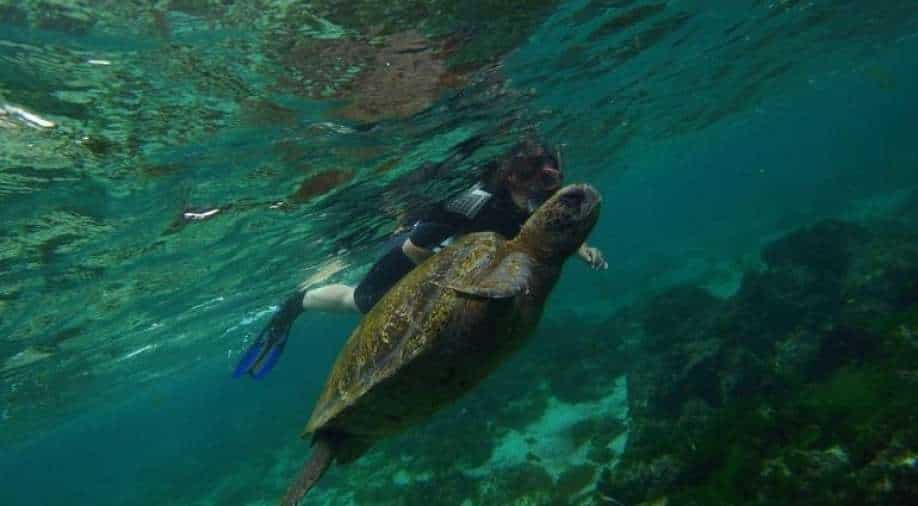 A turtle swims next to a tourist in San Cristobal Island at Galapagos Marine Reserve, Ecuador (file photo). Photograph:( Reuters )

Four Latin American nations have joined hands to merge their marine reserves to form one interconnected area. It will become one of the world’s richest pockets of ocean biodiversity. These nations include Colombia, Ecuador, Panama, and Costa Rica. They announced the creation of the Eastern Tropical Pacific Marine Corridor (CMAR) initiative

In order to create one of the world’s richest pockets of ocean biodiversity, four Latin American nations have joined hands to merge their marine reserves and form one interconnected area.

These nations include Colombia, Ecuador, Panama, and Costa Rica. They announced the creation of the Eastern Tropical Pacific Marine Corridor (CMAR) initiative on Tuesday.

The initiative looks to both join and increase the size of their protected territorial waters to create a fishing-free corridor. It will cover more than 500,000 sq km (200,000 sq miles) in one of the world’s most important migratory routes for whales, sharks, sea turtles and rays.

This development comes as there has been calls for action to protect rare marine species and commercial fish populations.

The foreign fishing fleets have been exploiting the region’s rich marine biodiversity. Not just this, it also looks to limit illegal, under-reported and unregulated (IUU) fishing by local communities.

After the announcement, Lasso told the Guardian, “Just as all the world leaders here have called for action not words, I believe this is a concrete action on behalf of Ecuador that goes beyond any words we can say here.”

“This is a sovereign decision of the Ecuadorian government but I have to point out that it is the result of five months of dialogue, which we’ve held with small-scale and industrial fishermen. For that reason, I don’t expect any problem of rejection or protest because it is a consensual decision,” Lasso said.