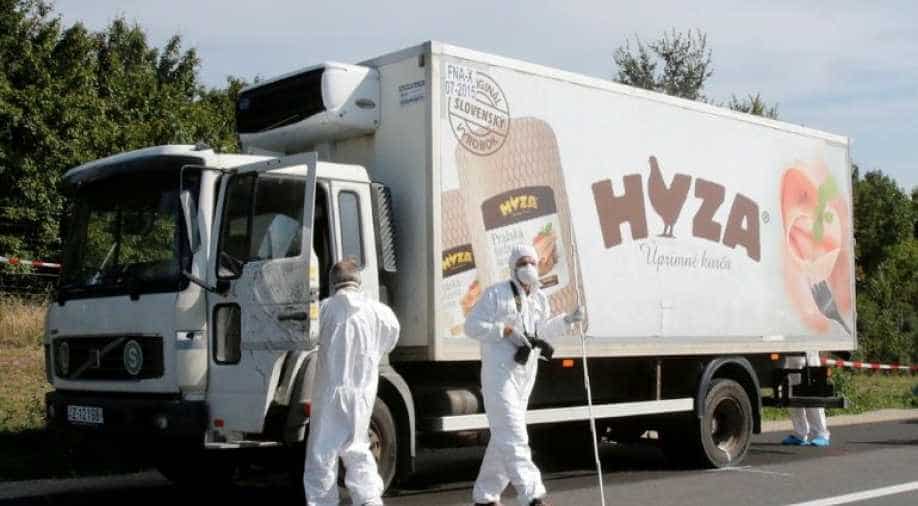 Forensic police officers inspect a parked truck in which up to 50 migrants were found dead, on a motorway near Parndorf, Austria August 27, 2015. Photograph:( Reuters )

The deaths in August 2015 of 59 men, eight women and four children from Syria, Iraq, and Afghanistan shocked Europe as it was struggling to cope with an influx of more than one million refugees and migrants that year.

A Hungarian court jailed four human traffickers for life on Thursday for the deaths of 71 migrants whose decomposing bodies were found crammed inside a truck dumped on an Austrian motorway.

The deaths in August 2015 of 59 men, eight women and four children from Syria, Iraq, and Afghanistan shocked Europe as it was struggling to cope with an influx of more than one million refugees and migrants that year.

It was the worst incident of its kind on the overland route across the Balkans and into central Europe taken by hundreds of thousands of people fleeing war and poverty in the Middle East, Africa, and Asia.

"The suffering in that truck is beyond imagination, as is the utmost indifference the perpetrators showed toward the deaths of these 71 people.

Therefore for those who played a core part, there is no doubt that the only punishment commensurate with their crime is the maximum one, which is life in jail without parole," presiding Judge Erik Mezolaki said.

One of the four defendants received a minimum of 30 years in prison - legally a life term in Hungary - but with the possibility of parole afterwards.

The Afghan ringleader of the gang and three Bulgarian accomplices were found guilty of manslaughter for refusing to stop the refrigerated truck to open the doors and let air in, despite the frantic pleas of that inside.

The passengers realized they were in danger of suffocating, so they banged on the doors, screamed and shouted to get the driver's attention, an investigating judge told an earlier court hearing last year.

Mezolaki said Yahoo Samsooryamal, the Afghan, had ordered the driver not to open the airtight doors of the truck as it headed from Hungary via Austria towards Germany, the preferred destination of many of the migrants who entered Europe in 2015.

He was in contact with Bulgarians Metodi Georgiev, Vencislav Todorov, and Ivaylo Stoyanov by phone during the journey - one of whom drove the truck while the other two followed in cars.

The temperature inside rose quickly after the truck was abandoned on an Austrian highway and the air began to run out, Mezolaki said. The driver had stopped on the motorway to check the truck's engine coolant but left the back doors locked.

All the victims - including children and infants - suffocated within two hours after the traffickers departed.

"They stopped first at about 6 a.m., but the victims made so much noise that (Georgiev) instructed (Todorov and Stoyanov) to keep going," Mezolaki said at the trial in Szeged near Hungary's southern border with Serbia.

"They tried to get away with trafficking even at the cost of the victims' lives ... At 7 a.m., the instruction was to see if they were still screaming so hard, and if not, stop and get lost. By that time, 68 of the victims had died."

Mezolaki said the traffickers had several opportunities to relieve the suffering of the victims. They had even purchased a steel cutter - but opted not to use it to open the truck.

Thursday's sentencing was a final ruling that increased an earlier court verdict of 25 years in jail against the four traffickers reached last year. It also included jail terms of several years for 10 more members of the trafficking ring who were not charged with manslaughter.

The truck was dumped near the town of Parndorf just after it crossed into Austria from Hungary and its rear doors were found wrapped in the wire as a secondary fastener to seal them shut.

Though the truck was left on Austrian territory, the trial was held in Hungary as it was the starting point of the deadly journey.

As Europe's migrant crisis peaked in 2015, the defendants stepped up their operation to maximize profits, smuggling up to 100 people a day from Hungary into Austria or Germany, prosecutors said in an earlier hearing.