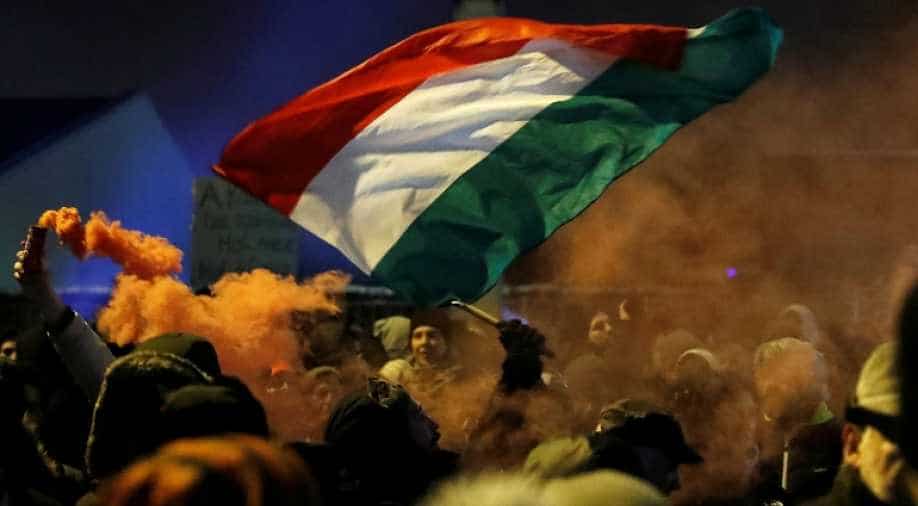 The Hungarian national flag and smoke from flares are pictured during a protest against a proposed new labour law, billed as the 'slave law', outside the headquarters of Hungarian state television in Budapest, Hungary, December 17, 2018. Photograph:( Reuters )

About 2,000 Hungarians protested at the state television building to demand independent public media and courts on Monday in the latest gathering uniting a fragmented opposition in action against right-wing Prime Minister Viktor Orban.

Earlier security guards ejected two independent lawmakers from the building after they tried to get into a studio to read out a petition against what they say is an authoritarian regime.

The two lawmakers were among about a dozen members of parliament who spent the night in the building demonstrating against Orban's policies, after a big protest on Sunday that took some 10,000 people to the streets.

"I have mainly come to defend the independent courts," said one of the protesters at state TV, Gabor Hacsi, 35, a lawyer. He referred to a law passed last week that would set up new administrative courts that will answer to the government.

"I hope we will see more protests with several thousands of people and I can only help by coming here."

Sunday's march, dubbed "Merry Xmas Mr Prime Minister", in effect united weakened opposition groups in action against Orban for the first time since 2010 when he came to power.

The protests pose no immediate threat to Orban, who has strong core support which helped him return to power in April.

But Peter Kreko, director of the think tank, Political Capital, said the government's reaction to the protests showed "short-sighted arrogance". He added: "This is stepping up one level in the regime's authoritarian logic."

In the petition, the opposition lawmakers backed the protest in calling for the withdrawal of a new labour law that boosts overtime hours, for independent public media and courts and for Hungary to join the European Union's prosecutors office.

A Fidesz spokesman criticised the lawmakers for going to the state TV building and said they were abusing their parliamentary powers by seeking to "meddle in editorial operations."

Independent lawmaker Bernadett Szel posted video footage on her Facebook page that showed the security guards tussling with her fellow-MP Akos Hadhazy and pushing him out of the building. Szel said she had also been ejected.

Szel read out the petition to the demonstrators.

Fidesz said on Saturday, in reaction to the protests, that it was "increasingly obvious that criminals have been part of the street riots organised by the Soros-network."

A spokesperson for George Soros' Open Society Foundations said that Soros had not stoked the protests.