Protesters had torched the Wendy’s restaurant where Brooks was killed

The police officer charged with the murder of Rayshard Brooks, who was killed on June 12, has been released from jail, a local television network WSBTV reported.

Garrett Rolfe, the officer in question, has been released on the condition of wearing an ankle monitor and obeying a curfew. The 27-year-old’s bond has been set at $500,000. He was charged with murder.

Brooks, a black man was killed amid protests over the murder of George Floyd at the hands of the police. Protests escalated after news broke that Brooks was shot in the back twice by Atlanta police on June 12, outside of a fast-food restaurant.

Over the last month, protests across the United States soared again racist behaviour by police, with many analysts backing the view that black folks are more susceptible to police brutality in the country, and have a higher rate of dying in an altercation with the police. 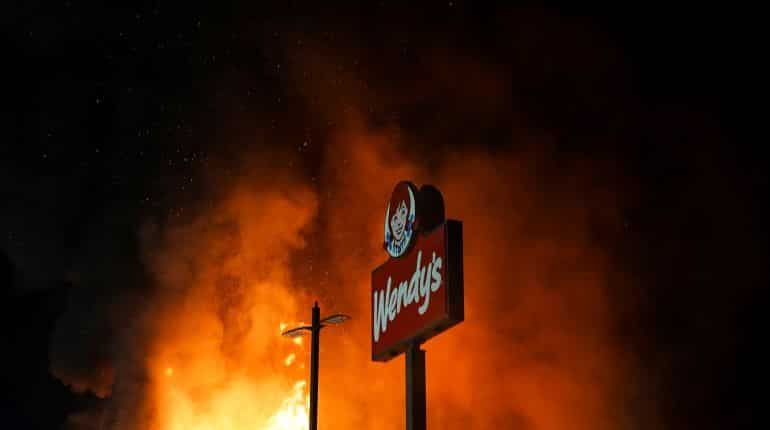 A Wendy’s burns following a rally against racial inequality and the police shooting death of Rayshard Brooks, in Atlanta, Georgia, US | Reuters

A second officer involved in the murder, Devin Brosnan, 26, was put on administrative duty and charged with aggravated assault. Following the uproar, the city's police chief had resigned.

Protesters had torched the Wendy’s restaurant where Brooks was killed. The employees of the restaurant had called the police saying that a man had fallen asleep in the parking lot.

Brooks was killed amid a national wave of protests in the US sparked by the murder of George Floyd, a black man who died after a white police officer, Derek Chauvin knelt on his neck for nine minutes. He was charged with second-degree murder and other three Minneapolis officers were charged with aiding and abetting.

Brooks was sleeping in his car when the police officer encountered him in the restaurant’s drive-through lane. Rolfe and Brosnan proceeded to administer a sobriety test, which led the situation to escalate.

In a video, Brooks was seen grabbing one of the officer’s Taser stun guns, and pointing it towards Rolfe before he was shot. However, investigators found that Rolfe had full knowledge of the fact that Taser had already been used twice, rendering it useless.