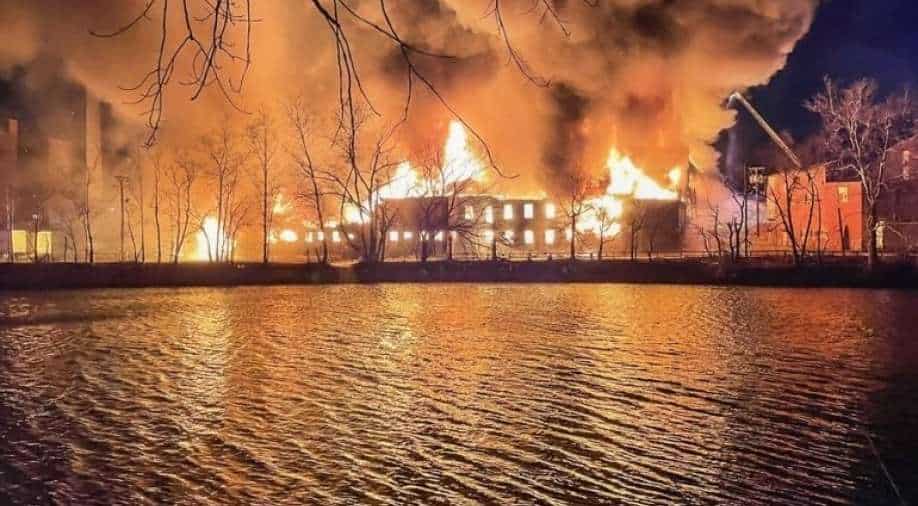 This photo shows the fire at a chemical warehouse in Passaic, New Jersey Photograph:( AFP )

Residents were urged to keep their windows shut, but the city’s mayor said Saturday morning that the situation did not require them to evacuate the area

Firefighters continued to battle a large blaze Saturday morning at a chemical plant in Passaic, New Jersey, more than 14 hours after it erupted, sending towering flames into the sky and clouds of smoke wafting through the region.

By 11 a.m., the fire had been downgraded to a four-alarm response from an 11-alarm response, but bitter low temperatures created other problems as firefighters contended with frozen hydrants and hazardous conditions.

City officials said that the worst outcome had been avoided so far: The fire did not reach the portion of the plant that houses large amounts of chemical products, and there were no major injuries.

Residents were urged to keep their windows shut, but the city’s mayor said Saturday morning that the situation did not require them to evacuate the area.

“It’s one of the worst fires I’ve experienced as mayor because of the potential,” Mayor Hector Lora said in a phone interview around 10:30 a.m. “It had the potential to be the worst in our city. We would be looking just at evacuating hundreds and hundreds of people had it reached the chemical section.”

The blaze erupted just after 8:30 p.m. Friday at the Majestic Industries warehouse, which houses Qualco, a company that manufactures chlorine pellets for swimming pools. The facility can store more than 100,000 pounds of the product.

The website for Qualco appeared to be down Saturday morning, and a representative could not immediately be reached.

The building was largely empty at the time of the fire, with only one security guard present, officials said. More than 200 firefighters from around the region were sent to Passaic, a city of about 70,000 residents that is roughly 10 miles from Manhattan.

The cause of the fire remained unknown. Officials said inspectors would not be able to begin making a determination until the situation was under control.

Lora said some similar fires at plants in the area had been caused by an increased use of heaters and equipment in the cold weather months but emphasized that it was not clear if that was the case Friday.

The mayor and state environmental officials said that toxic fumes were not being emitted and that air quality readings in the area remained within state and federal limits.

“We’re going to move forward with more permanent setups to make sure the air quality in the area is continually under the standards,” said Ken Pincus, the city’s health officer.

The direction of the wind Friday night sent smoke and flames directly up into the air, Lora said, and was also helping to keep the blaze alive Saturday.

“The winds last night, I would say, were our best friend,” Lora said. “This morning it could become our worst enemy as it continues to feed the fire.”

A section of the more than 200,000-square-foot building collapsed, and fire officials said they were concerned about structural issues in other areas.

It was unclear how close the blaze had been to affecting the largest supply of chemicals. Only one firefighter reported a minor injury to his eye, officials said, and no residents were injured.

About 900 families live in a housing complex near the plant, Lora said, and would have needed to leave if conditions had worsened.

“Where would we put them? Where do you take them when the air quality is a concern every area that you turn?” Lora said. “The building can be replaced, but human life cannot be. That everyone’s safe is what I’m most grateful for right now.”

The blaze sent billows of smoke through the region Friday night, and New York City officials said residents there might see or smell smoke.

Video posted on social media shows a large ball of fire erupting along the side of a highway as thick clouds of smoke roar into the sky. The flames drew crowds of onlookers, some of whom reported hearing explosions and seeing sparks.

Lora said he had spoken to Gov. Phil Murphy, who dispatched state environmental and emergency management officials to the scene.

Murphy said on Twitter on Friday that he was urging “everyone in Passaic to stay safe.”

“Praying for the safety of our first responders on the scene,” he wrote.