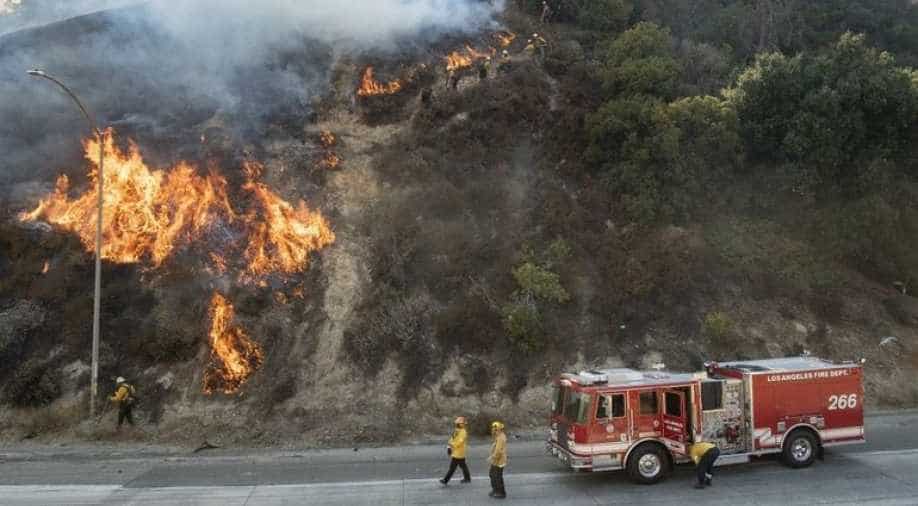 Firefighters check on a backfire during the Saddleridge fire in Newhall, California. Photograph:( AFP )

By Saturday, it had consumed 7,551 acres about 32 kilometres north of downtown Los Angeles, fire officials said, adding that the blaze was about 19 per cent contained.

Firefighters battled to contain wildfires in southern California on Saturday after about 100,000 people were forced to evacuate their homes.

The area was under a red flag warning of critical fire danger -- strong winds and very low humidity, the National Weather Service said.

The so-called Saddleridge fire that burned through the San Fernando Valley area of greater Los Angeles was the strongest of several across southern California.

By Saturday, it had consumed 7,551 acres about 32 kilometres north of downtown Los Angeles, fire officials said, adding that the blaze was about 19 per cent contained.

Some residents were allowed to return to their homes on Saturday as a forecast of cooler temperatures and lighter winds improved the outlook.

"We are prepared for any flare-ups as they occur," Los Angeles Fire captain Branden Silverman told local media on Saturday.

One man in his 50s died of a heart attack as he struggled to save his home, fire officials said.

Part of Los Angeles County was blanketed with smoke from the fire, prompting an advisory from air quality officials about unhealthy conditions.

The fire broke out Thursday night and quickly grew out of control for unknown reasons in the city of Sylmar, driven by low humidity and gusts known as the Santa Ana winds.

About 1,000 firefighters, backed by water-dropping helicopters and planes releasing fire retardants, had fought the blaze that forced the shutdown of several major highways.

The metro line in the area was also closed as were schools and businesses.

Some 200 firefighters battled several other blazes in Riverside County, east of Los Angeles, including one that tore through a trailer park and was started by burning trash.

That blaze destroyed 76 homes and buildings and killed an 89-year-old woman who was unable to escape the flames.

Authorities ordered the evacuation of several hundred homes in the area.

The wildfires in the south of the state erupted as California's largest utility, Pacific Gas & Electric (PG&E), implemented rolling power blackouts that affected some two million people in northern California.

The shutoffs were designed to reduce the threat of wildfire that can be sparked by lines downed in heavy winds.

Last November, PG&E's faulty power lines were determined to have sparked the deadliest wildfire in the state's modern history, which killed 86 and destroyed the town of Paradise.