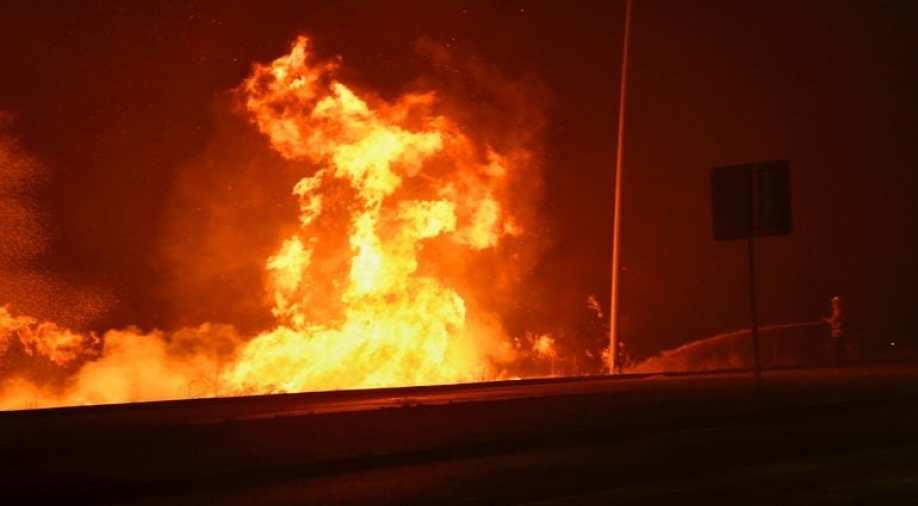 By Friday evening, the strongest blaze, dubbed the Saddleridge Fire, had consumed 7,542 acres in areas of the San Fernando Valley, about 32 kilometres north of downtown Los Angeles, fire officials said.

Wind-driven wildfires forced the evacuation of about 100,000 people in southern California Friday and destroyed dozens of structures and homes as authorities warned it could take days to extinguish the flames.

By Friday evening, the strongest blaze, dubbed the Saddleridge Fire, had consumed 7,542 acres in areas of the San Fernando Valley, about 32 kilometres north of downtown Los Angeles, fire officials said.

They added that it had damaged or destroyed at least 31 structures and was 13 per cent contained as of Friday evening.

One man in his 50s died of a heart attack as he struggled to save his home in the Porter Ranch area, fire officials said.

The fire quickly got out of control after it erupted late Thursday for unknown reasons in the city of Sylmar, driven by low humidity and gusts known as the Santa Ana winds.

"Do not wait to leave," he urged residents. "If we ask you to evacuate, please evacuate."

He said some 1,000 firefighters, backed by water-dropping helicopters and planes releasing fire retardants, were battling the blaze that forced the shutdown of several major highways. The metro line in the area was also closed as were schools and businesses.

"We've calculated that the fire is moving at a rate of 800 acres per hour," Terrazas said, adding that it would probably take days to get it under control.

Some 200 firefighters were meanwhile battling several other blazes in Riverside County, east of Los Angeles, including one that tore through a trailer park and was started by burning trash. That blaze, dubbed the Sandalwood fire, destroyed 76 homes and buildings and killed an 89-year-old woman who was unable to escape the flames.

There were no immediate reports of injuries, but authorities ordered several hundred homes in the area be evacuated.

The National Weather Service said it expects the high winds fanning the flames to subside by Friday evening, making it easier for firefighters to do their work.

A red flag warning -- which indicates ripe conditions for wildfires -- remains in effect through Saturday.

"That seems to be the new normal in California," lamented Sylmar resident Oscar Mancillas, as he helplessly watched the flames spread in the hillside near his home.

"I mean the vegetation is so dry... but we're kind of lucky because it didn't grow back from the last fire," he told AFP. "In California you have to be earthquake ready and you have to be fire ready... and for those of us who have a family, it's a little daunting sometimes."

About 312,000 customers remained in the dark Friday as a result of the shutoffs designed to reduce the threat of wildfire that can be sparked by lines downed in heavy winds.

Many schools and universities were also closed in northern parts of the state as people stocked up on gasoline, water, batteries and other basics, with frustration mounting at the blackouts condemned by some as "third world."

"We're seeing a scale and scope of something that no state in the 21st century should experience," Governor Gavin Newsom said Thursday, blaming decades of what he called neglect and mismanagement by PG&E.

"This is not, from my perspective, a climate change story as much as a story about greed and mismanagement over the course of decades," Newsom said. "Neglect, a desire to advance not public safety but profits."

PG&E has defended the outages as necessary for safety reasons and has said it will take days before power is restored to all customers as inspections must be conducted on all power lines and equipment before the lights can be turned back on.

"This is not how we want to serve you but blackouts can happen again," Bill Johnson, the CEO of the company said Thursday.

Last November, PG&E's faulty power lines were determined to have sparked the deadliest wildfire in the state's modern history, which killed 86 and destroyed the town of Paradise.