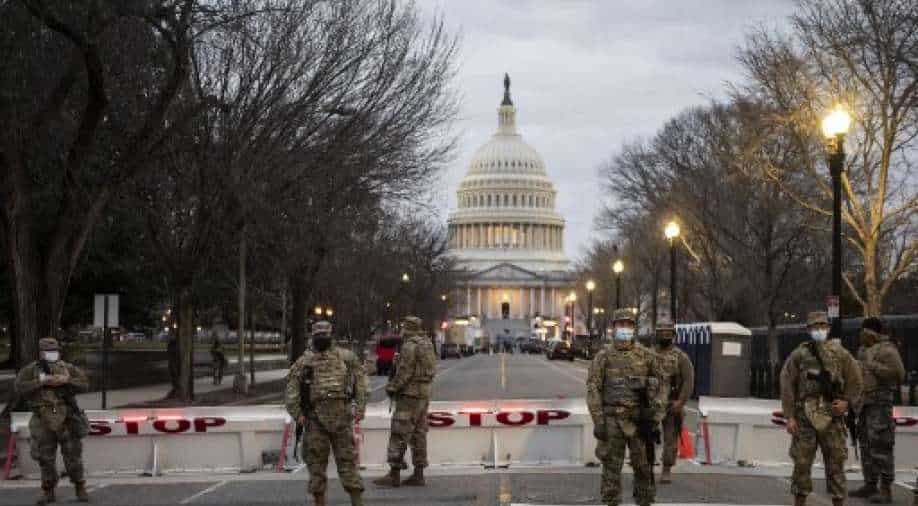 US National Guard stand watch at the US Capitol in Washington, DC  Photograph:( AFP )

Security has been bolstered in state capitals ahead of Joe Biden's presidential inauguration ceremony.

After the violence at the US Capitol, serious security concerns have gripped Washington with tens of thousands of security personnel from the National Guard and law enforcement agencies descending in Washington for Joe Biden's inauguration on January 20

Reports say US defence officials are worried about an insider attack or other threat from service members securing the inauguration.

FBI has been vetting National Guard troops amid fears of "insider attack" reports say even as security has been bolstered in other state capitals as well ahead of Wednesday's presidential inauguration ceremony.

After the FBI warning of armed protests, more than a dozen states have activated National Guard troops to help secure their Capitol buildings. State capitals in battleground states where Trump directed his accusations of voter fraud have been especially on high alert.

The building is under high security ahead of US president-elect Joe Biden's inauguration even as several people gathered at South Carolina’s statehouse me carrying American flags. The group included Trump supporters who briefly interacted with another group of demonstrators even as more demonstrations are expected in the lead-up to Biden’s inauguration.

Meanwhile, Mike Pence visited US troops on the final trip as vice-president.