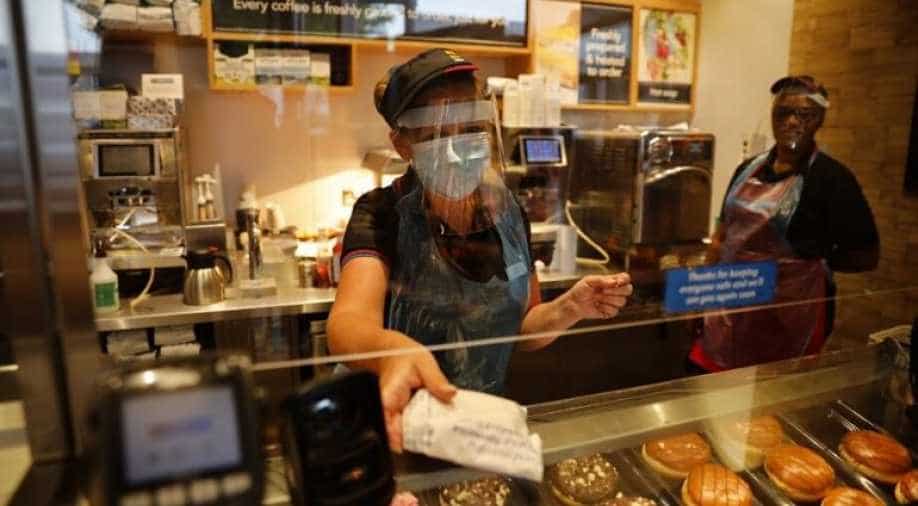 An employee wearing PPE including a mask and visor serves at the counter of a Greggs bakery in London on June 18, 2020 after the chain reopened hundreds of stores around the UK following their coronavirus shutdown Photograph:( AFP )

Starting next week, face coverings will be mandatory in all shops, citing risks of a second-wave

The United Kingdom has officially made the usage of face masks compulsory across shops and supermarkets in England.

Starting next week, face coverings will be mandatory in all shops, citing risks of a second-wave.

Face masks were made mandatory on public transport on June 15. On Tuesday, this will be formally extended to shops and supermarkets.

"The Prime Minister has been clear that people should be wearing face coverings in shops and we will make this mandatory from July 24," PM Boris Johnson said in a statement.

“There is growing evidence that wearing a face covering in an enclosed space helps protect individuals and those around them from coronavirus," the statement added.

If shopkeepers or shoppers are seen without a mask, they could face a fine of over $123 (100 British Pounds). The police will oversee the enforcement of this rule.

If a second-wave were to infect people across the country, over 120,000 could die over nine months. A health expert called this the worst-case scenario.

Britain faces a harsh winter, with people usually staying inside and spending more time in closed spaces, which could set the ground for the virus to resurface.

Stephen Holgate, the author of a report by Britain’s Academy of Medical Sciences (AMS), claimed that the second-wave “could be more serious than the one we’ve just been through”.

"This is not a prediction, but it is a possibility," Holgate said in an online briefing.

"Deaths could be higher with a new wave of COVID-19 this winter, but the risk of this happening could be reduced if we take action immediately”, Holgate added.