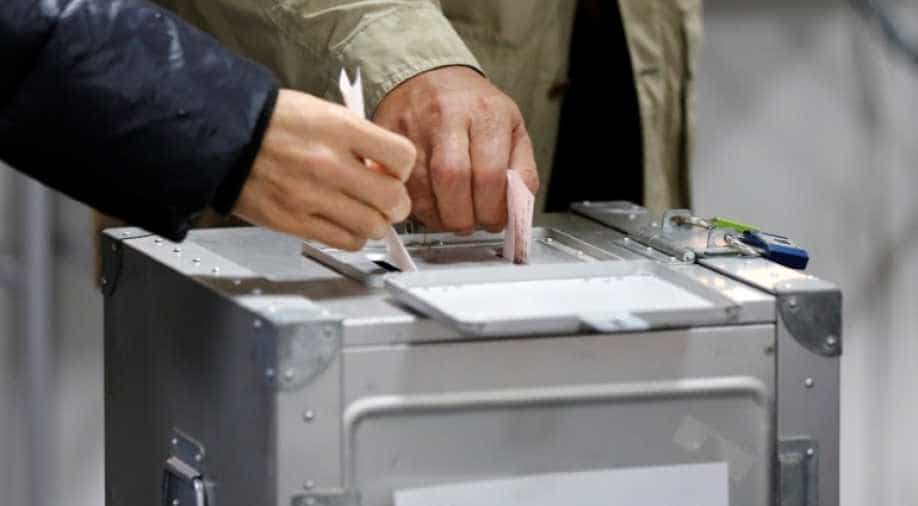 People cast votes at a polling station in Tokyo on October 22. Photograph:( AFP )

The 64-year-old, who took office a month ago, said the forecasts based on exit polls showed the public has "trust" in his long-ruling Liberal Democratic Party (LDP) and its junior coalition partner Komeito

The 64-year-old, who took office a month ago, said the forecasts based on exit polls showed the public has "trust" in his long-ruling Liberal Democratic Party (LDP) and its junior coalition partner Komeito.

But as the votes were counted, analysts warned that a poor showing could raise questions within the LDP over the prime minister's popularity and leadership ability.

Public broadcaster NHK predicted the coalition would win 239-288 of the 465 seats in parliament's lower house.

TV Asahi said the coalition was expected to win 280 seats, down from its previous total of 305, weakening the dominance of the LDP, which has held power almost continuously since the 1950s.

"If the ruling coalition is given a majority, the government is given trust. It is a big deal," Kishida said in televised comments.

He added that he hoped to issue a fresh stimulus package by the end of the year to counter the impact of the pandemic on the world's third-largest economy.

"As far as economic measures, upon receiving the results of this election, I would like to draft them as soon as possible." He had previously said the package would be worth tens of trillions of yen.

Kishida was voted LDP leader after Yoshihide Suga resigned just a year into the job, partly due to public discontent over his response to the Covid-19 crisis.

He has not enjoyed a political honeymoon, however, with approval ratings around 50 percent, the lowest in two decades for a new administration in Japan.

Cases have dropped precipitously since a record wave this summer that pushed the Tokyo Olympics behind closed doors, and voters in the capital said the pandemic was a major factor in their decision.

"The economy is suffering because of the coronavirus, so I compared the politicians' responses," said Chihiro Sato, 38, a housewife and mother of a toddler.

But engineer Hiroyasu Onishi, 79, said he was more concerned by "the military threat from China".

Kishida has outlined plans to tackle inequality heightened by the pro-business policies of Suga and his predecessor Shinzo Abe.

He has vowed to distribute wealth more fairly under a so-called new capitalism, although the details remain vague.

Kishida had set a comfortable target of winning 233 lower-house seats, a simple majority including LDP and Komeito lawmakers.

The LDP previously boasted a commanding majority of 276 seats on its own.

NHK predicted the party would hang on to between 212-253 seats on Sunday, while TV Asahi said it would win 243, still a simple majority without Komeito.

In recent decades, votes against the LDP have been split between multiple major opposition parties, but this time five rival parties boosted cooperation in a bid to dent its stranglehold.

"It's a defeat for Kishida as his party loses seats, but he is still able to secure his premiership for now," Shinichi Nishikawa, a professor of political science at Meiji University in Tokyo, told AFP.

"He avoided the worst scenario in the election but he may lose his influence," Nishikawa said, adding that an upper house vote next summer will be a "key test" of Kishida's longevity as leader.

Tobias Harris, senior fellow for Asia at the Center for American Progress, said that at the lower end of the exit poll predictions, "there will be debates within the LDP about the vision for the party going forward".

"There are going to be questions about his leadership ability, his popularity", he told AFP.

As well as vowing to tackle the pandemic and working to boost the middle class, the LDP has said it will aim to increase defence spending to counter threats from China and North Korea.

But Kishida has so far distanced himself from social causes such as same-sex marriage and allowing married couples to have different surnames.

Kishida said that if his win was confirmed, he wanted to attend the COP26 summit in Glasgow as his first overseas engagement after the election.