'Ever Given' floats again but backlog at Suez Canal continues 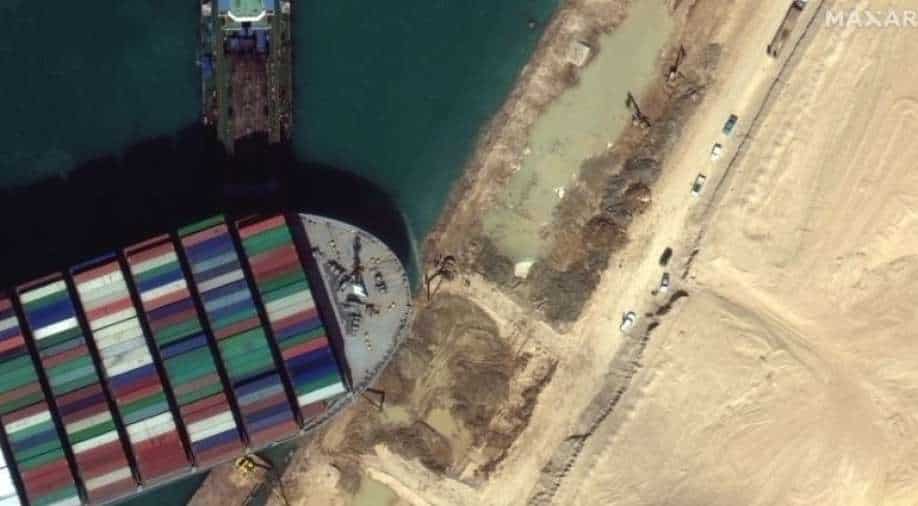 A file photo of the earth moving equipment excavating sand near the bow of the Ever Given container ship, in Suez Canal in this Maxar Technologies satellite image  Photograph:( Reuters )

The rear of the ship was re-floated but the front remained firmly stuck. Multiple tug boats were working overtime but it was Sunday's high tide that proved to be a game changer. Officials said the next 24 to 48 hours would be crucial and they were right. Thanks to some favourable tide and some more tugging the vessel was back in deep waters

After seven days of dredging and tugging, it's green light at the Suez Canal. The massive container ship 'Ever Given' is floating again. It's good news for Egypt and for the global economy, but it has also been a learning curve.

One ship was able to freeze global trade. One blocked canal spurred a run on the oil market.

The rear of the ship was re-floated but the front remained firmly stuck. Multiple tug boats were working overtime but it was Sunday's high tide that proved to be a game changer. Officials said the next 24 to 48 hours would be crucial and they were right. Thanks to some favourable tide and some more tugging, the vessel was back in deep waters.

It has been taken to a location outside the canal for inspection and more importantly, trade has resumed as hard as it was to dislodge the ship. The mission is only half done. The tailback at the Suez Canal is massive. Every second lost is worth its weight in thousands of dollars. 425 ships were stuck at both ends of the canal. Egypt is planning to keep the Suez open 24x7 to clear the backlog.

Even then it could be days before traffic eases but here's another problem. These vessels were not sailing to the Suez Canal. They were sailing through it, so when they reach port another hold-up could be on the cards.

For seven days, the 'Ever Given' held up cargo, both commercial and humanitarian. The estimated cost of this hold-up? 9.6 billion dollars every day and for Egypt, this was a national crisis.

The country normally earns between 12 and 14 million dollars from the canal every day.

Last week, this income disappeared. So, the canal workers were rightly over-joyed. They found their own unique way to celebrate by sounding the foghorns in their tug boats. The coast is clear quite literally this time. At the end of the day, modern technology and human ingenuity pulled through but not before a stern test.

The 'Ever Given' is a big ship. It weighs 200,000 tonnes and is 400-metre-long and as high as the empire state building. So, the obvious question is what was a ship this size doing in the Suez Canal?

This is an artificial waterway. The canal is more than 150-year-old. Recently, it has undergone many upgrades. So theoretically, it should have been smooth sailing for the 'Ever Given' but it wasn't.

The ship's owners say strong winds pushed the vessel ashore but canal authorities suspect human error, there is an investigation underway. So, we should have the answers soon but should a gust of wind be able to topple the world economy?

It's not exactly the sign of a robust system. The Suez Canal is too big and important for its own good. Fifty ships sail through it every day.

In 2020, a total of 19,000 vessels used it, ferrying 1.17 billion tonnes of cargo. The canal services 12% of global trade. The bigger they are, the harder they fall. This time, it was a multi-billion dollar fall.

So, what are the alternatives?

Right now, there isn't any, the Suez Canal saves time, cost and fuel. It shortens the voyage from Europe to Asia by around a week. That's like dog years in global trade. The alternative is to sail around the African continent. Experts agree that in this day and age, it is simply not feasible. The Suez Canal has been blocked before in 2004. It was shut for three days for same reason.

An oil tanker, Tropic Brilliance, was stuck but it wasn't a billion dollar traffic jam. Because back then, the stakes weren't this high. Today, we are living in the age of containers. Ships are bigger than our tallest monuments.

It pays to operate these mammoth vessels. In one trip, you can transport goods worth millions of dollars. The 'Ever Given', for example, was carrying one billion dollars worth of goods.

It's a system set-up for mishaps like this one. The ship may have moved but this story is far from over. The oil traders are watching closely. Exporters are weighing their options and wait till insurance companies get the bill. The Suez Canal is not just any other waterway. It is steeped in history, not just economic but political as well.

The last time, there was a Suez crisis was more than half a century back. The world we live in was shaped by that crisis. This one may not be as significant but it raises crucial questions about the world economy.