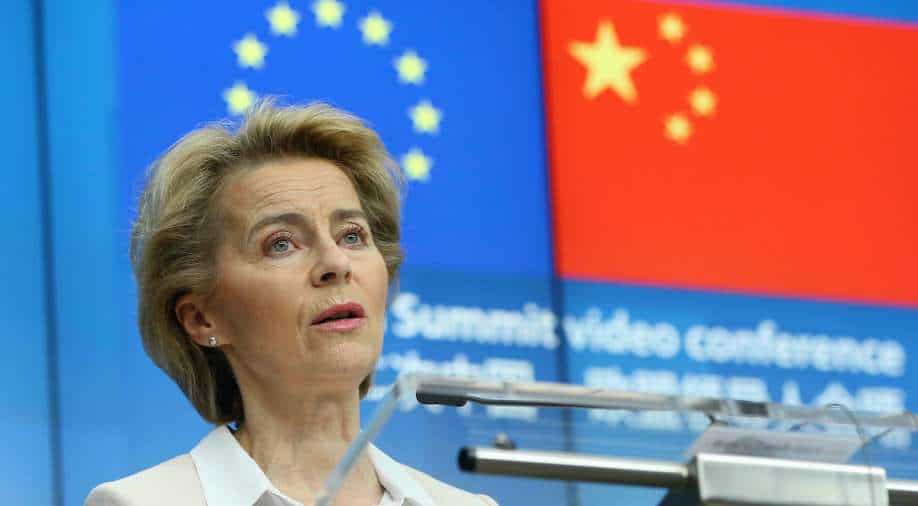 John Sudworth said he had quit China for Taiwan, along with his Irish journalist wife, after a "full-on propaganda attack" from the authorities due to his reporting on Xinjiang rights abuses and the coronavirus pandemic

The European Union on Friday condemned the "harassment" of foreign journalists in China after a BBC correspondent left the country in the face of legal threats and pressure from authorities.

John Sudworth said he had quit China for Taiwan, along with his Irish journalist wife, after a "full-on propaganda attack" from the authorities due to his reporting on Xinjiang rights abuses and the coronavirus pandemic.

"This is the latest case of foreign correspondents being driven out of China as a result of continuous harassment and obstruction to their work, coming on top of the expulsion of at least 18 correspondents last year," a spokesperson for EU foreign policy chief Josep Borrell said in a statement.

"The EU has repeatedly expressed its concerns to the Chinese authorities at the undue working restrictions imposed on foreign journalists and reported related harassment."

"Foreign correspondents play an important role in imparting information across frontiers and contributing to strengthening mutual understanding between the EU and China."

Press freedom groups say the space for reporters to operate in China is increasingly tightly controlled, with journalists followed on the streets, suffering harassment online and refused visas.

At least 18 foreign correspondents were expelled by China last year, during a tit-for-tat row with the United States that decimated the international press presence in the country.

China's foreign ministry on Wednesday said Sudworth had not given any notice of his departure, and it strongly condemned the BBC's reporting on Xinjiang, COVID-19 and Hong Kong.

"We never threatened him," foreign ministry spokeswoman Hua Chunying told a regular daily news briefing. "We don't know why he left because he didn't say goodbye."

Announcing Sudworth's move, the BBC said in a statement that he remained its China correspondent.

"John's work has exposed truth the Chinese authorities did not want the world to know," it said.

Last month, China barred the BBC World News from being aired in response to what the Chinese embassy in London called "relentless fabrication of 'lies of the century' in reporting China."

One flashpoint was a BBC report in February that women in Xinjiang's internment camps for Uighurs were subject to rape, sexual abuse and torture.

China has repeatedly said the BBC's report was false and it has also forcefully denied other claims of human rights abuses in Xinjiang raised by western governments and rights groups.

Sudworth was not one of the BBC journalists credited in the Xinjiang report, though he has been criticised by name by the Chinese foreign ministry as well as Chinese state and Communist Party-backed media for his reporting.

Chinese state media recently reported that unnamed people and entities in Xinjiang were preparing to sue the BBC over reports related to the region. The state media reports did not include details of a suit and no corresponding notices were made public on local court sites.

"I think those people are trying to protect their own rights and interests through legal means, but such acts have nothing to do with the Chinese government," spokeswoman Hua said.

The Foreign Correspondents' Club of China said that Sudworth had left at short notice on March 23 with his wife Yvonne Murray, a journalist for Irish broadcaster RTE.

It said Sudworth had spent the past two years on visas of one-, three- and six-month durations - shorter than the usual one-year for foreign correspondents.

"Abuse of Sudworth and his colleagues at the BBC form part of a larger pattern of harassment and intimidation that obstructs the work of foreign correspondents in China and exposes their Chinese news assistants to growing pressure," an FCCC statement said.

"We urge China to live up to its stated commitment to facilitate unhindered reporting in China. In particular, the FCCC calls for an end to dangerous, personal attacks on individual reporters and foreign media outlets."

China expelled more than a dozen foreign journalists working for US media organisations in 2020. That year saw a “rapid decline in media freedom”, the FCCC said in a report this month.

Several foreign correspondents have relocated to Taiwan from China. A foreign ministry spokeswoman in Taiwan said she could not comment on individual cases but said: "We welcome all reporters from media outlets to come to Taiwan and enjoy the freedom of the press and speech."