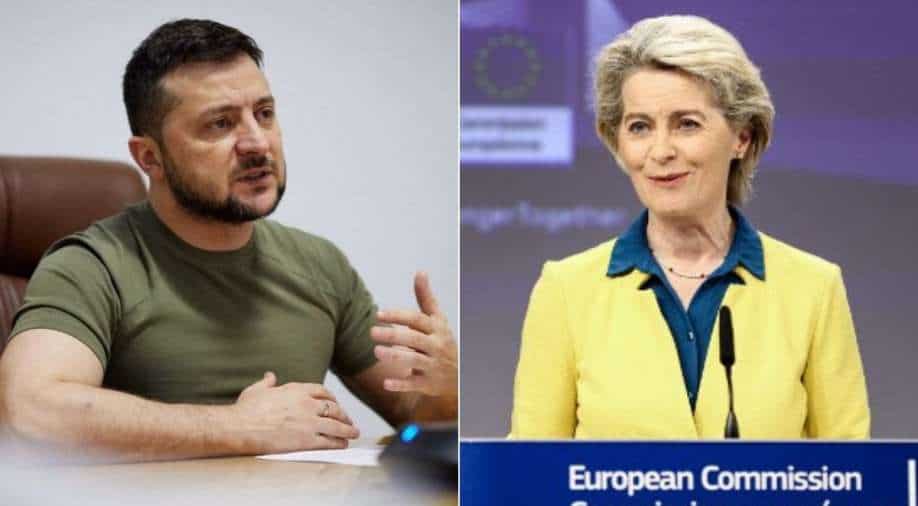 The move that could open up a years-long path toward joining the bloc. A day before, during their crucial visit to Kyiv on Thursday, European leaders had backed Ukraine's bid to be accepted as a candidate for the European Union membership.

Amid the Russia-Ukraine war, the European Commission on Friday (June 17) recommended Ukraine be formally named a "candidate" for joining the EU. "Yes, Ukraine should be welcomed as a candidate country - this is based on the understanding that good work has been done but important work also remains to be done," Ursula von der Leyen said.

Ursula von der Leyen backed the EU candidacy for Ukraine as she said that Ukrainians were ready to die to deepen their ties to the European Union.

The bid was supposed to be approved by all 27 member states to get finalised. The move could open up a years-long path toward joining the bloc.

While responding to the backing, Ukrainian President Volodymyr Zelensky on Friday praised a decision.

"It's the first step on the EU membership path that'll certainly bring our victory closer," Zelensky wrote on social media, adding that he was "grateful" to EU chief and "each EC member for a historic decision".

Russia's foreign ministry accused Brussels of "manipulating" Ukraine. "We see how for many years the Western community has been manipulating the idea of some kind of involvement of Ukraine in their integration structures," ministry spokeswoman Maria Zakharova was quoted as saying by Russian news agencies.

A day before, during their crucial visit to Kyiv on Thursday, the European leaders had backed Ukraine's bid to be accepted as a candidate for the European Union membership.

French President Emmanuel Macron told a joint press conference with Italian and German leaders that "all four of us support the status of immediate candidate for accession."

Macron, Germany's Chancellor Olaf Scholz and Italian Prime Minister Mario Draghi arrived in Ukraine by train in a show of support for the war-torn nation. They were later joined in Kyiv by Romania's President Klaus Iohannis.

Ukrainian President Volodymyr Zelensky, who was present during the press conference, had promised the nation was ready to put in the work to become a fully-fledged EU member.