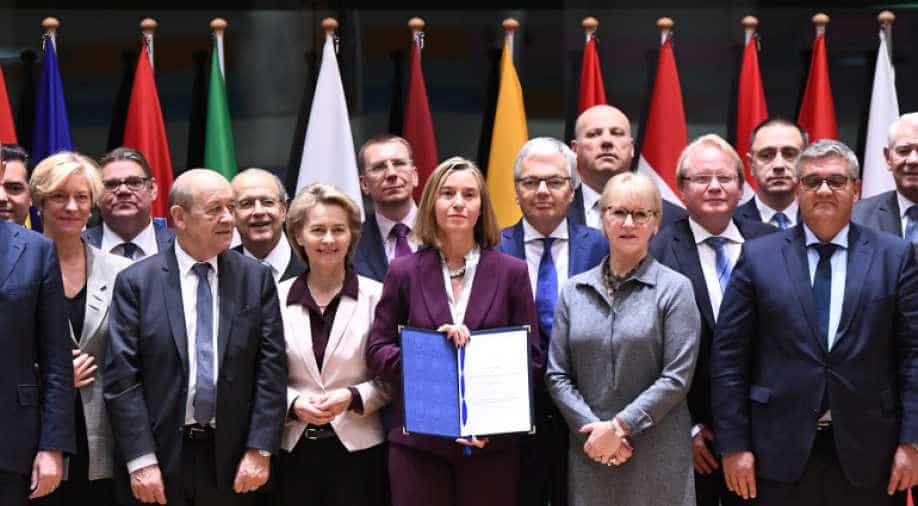 European Union foreign and defence ministers attend a signature ceremony of a defence pact, aiming to mark a new era of European military integration to cement unity after Britain's decision to quit the bloc, in Brussels, Belgium Photograph:( Reuters )

France and Germany edged towards achieving a 70-year-old ambition to integrate European defences on Monday, signing a pact with 21 other EU governments to fund, develop and deploy armed forces after Britain’s decision to quit the bloc.

First proposed in the 1950s and long resisted by Britain, European defence planning, operations and weapons development now stands its best chance in years as London steps aside and the United States pushes Europe to pay more for its security.

Foreign and defence ministers gathered at a signing ceremony in Brussels to represent 23 EU governments joining the pact, paving the way for EU leaders to sign it in December.

Those governments will for the first time legally bind themselves into joint projects as well as pledging to increase defence spending and contribute to rapid deployments.

“Today we are taking a historic step,” Germany’s Foreign Minister Sigmar Gabriel told reporters. “We are agreeing on the future cooperation on security and defence issues ... it’s really a milestone in European development,” he said.

The pact includes all EU governments except Britain, which is leaving the bloc, Denmark, which has opted out of defence matters, Ireland, Portugal and Malta. Traditionally neutral Austria was a late addition to the pact.

Paris originally wanted a vanguard of EU countries to bring money and assets to French-led military missions and projects, while Berlin has sought to be more inclusive, which could reduce effectiveness.

Its backers say that if successful, the formal club of 23 members will give the European Union a more coherent role in tackling international crises and end the kind of shortcomings seen in Libya in 2011, when European allies relied on the United States for air power and munitions.

Unlike past attempts, the U.S.-led NATO alliance backs the project, aiming to benefit from stronger militaries.

The club will be backed by a 5-billion-euro defence fund for buying weapons, a special fund to finance operations and money from the EU’s common budget for defence research.

Members will also be required to submit national plans and be subject to a review system identifying weak spots in European armies with the goal of plugging those gaps together.

Many governments say Russia’s seizure of Ukraine’s Crimea in 2014 was a turning point, after years of defence spending cuts that left Europe without vital capabilities.

“This is a commitment for countries to do better together,” French Foreign Minister Jean-Yves Le Drian said. “It comes at a time of significant tension,” he said, referring indirectly to Russia’s rising military reach and Islamic militants who have attacked European cities.

Despite an Anglo-French-led EU defence integration effort in 1998, Britain blocked formal collaboration on military matters, wary of the creation of an EU army.

Defence integration was revived by France and Germany, with support from Italy and Spain, in a show of unity after Britons voted to leave the EU in June 2016.

The EU had struggled in military and humanitarian missions in the Balkans, Libya and in Africa over the past 20 years and were caught off guard by Russia’s Crimea annexation.

British Foreign Secretary Boris Johnson likened London’s support to Gothic architecture, saying: “We are there, like a flying buttress to support the cathedral,” he told reporters.

In a possible compromise, Britain may be able to join in, but only on an exceptional basis if it provides substantial funds and expertise.