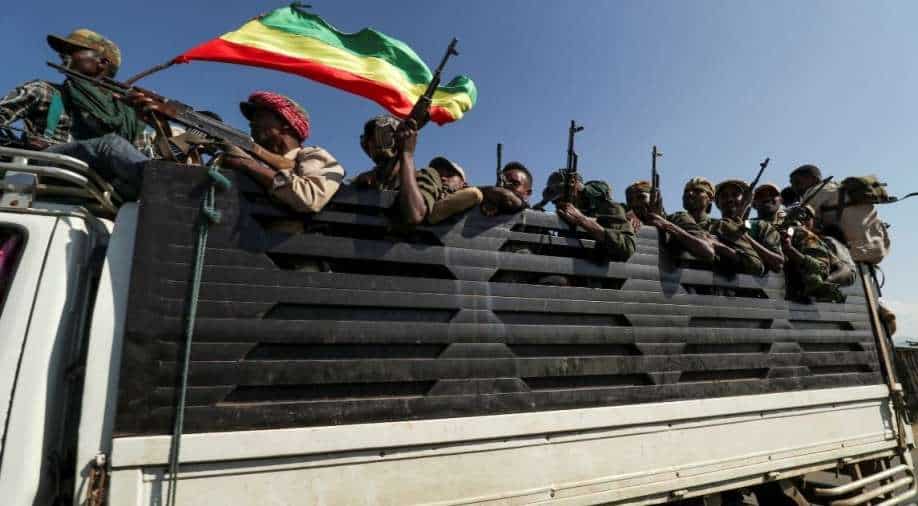 Members of Amhara region militias ride on their truck as they head to face the Tigray People's Liberation Front (TPLF), in Sanja, Amhara region near a border with Tigray, Ethiopia Photograph:( Reuters )

Ethiopia's government said its forces have been advancing towards Tigray region on Saturday after PM Abiy Ahmed unleashed a military campaign against the Tigray People's Liberation Front(TPLF) on November 4.

The Ethiopian forces said they had seized another town as they advance towards the capital of the northern Tigray region.

The federal forces said they had taken control of several towns including Aksum and Adigrat which is north Mekelle even as there were reports of rocket attack on Bahir Dar which is the capital of Asmara region.

Tigray forces had earlier accused the government of bombing a university in capital Mekelle.

Earlier, Tigray forces had fired rockets at two airports in Amhara as the fighting escalated.

The fighting has created a humanitarian crisis as the UNHCR said 31,000 refugees had already reached Sudan as UN chief Antonio Guterres had warned about "dramatic humanitarian impact".

"Our forces have now fully liberated Adigrat town from TPLF militia as of today," Prime Minister Abiy Ahmed who had won last year's Nobel Peace Prize, said, adding, "Together with the rest of Ethiopia, we will work to ensure that all humanitarian needs will be addressed."

"The overall safety and well-being of the people of Tigray is of paramount importance to the Federal government and we will do all that is necessary to ensure stability prevails in the Tigray region and that our citizens are free from harm and want," Abiy Ahmed asserted.