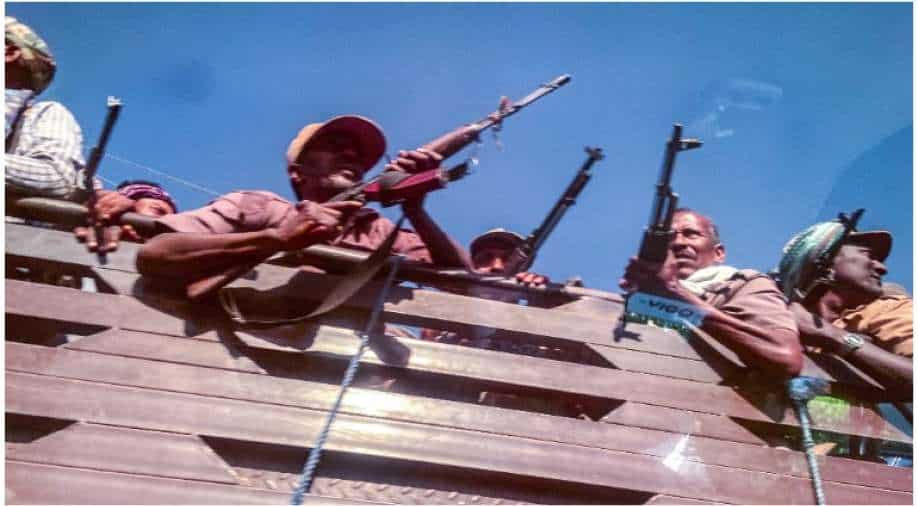 A picture taken through a car window shows Ethiopian Amhara militia fighters, that combat alongside federal and regional forces against northern region of Tigray, as they mobilise towards Tigray, in the Northwest of the city of Gondar, Ethiopia, on November 09, 2020. Photograph:( AFP )

United States "strongly urged" de-escalation of violence and end to the conflict in Ethiopia's Tigray region. The reaction came after reports of mass killing in a town. The mass killings were reported by Amnesty International. Tibor Nagy, the top US diplomat for Africa tweeted and made the appeal for calm.

"We condemn the massacre of civilians in Mai-Kadra and strongly urge immediate steps to de-escalate and end conflict throughout the Tigray region. It is essential that peace be restored and civilians be protected," he tweeted.

We condemn the massacre of civilians in Mai-Kadra and strongly urge immediate steps to de-escalate and end conflict throughout the Tigray region. It is essential that peace be restored and civilians be protected.

The conflict in Tigray has given rise to fears of a civil war in Ethiopia where federal forces are engaged in fighting with Tigray region of the country. The conflict has already become a humanitarian crisis as casualties are mounting and more than 14,000 people in Ethiopia have been displaced due to hostilities.

These people are fleeing to neighbouring Sudan where the government is not well equipped to take care of sudden influx of so many people. The conflict of Ethiopia with its own region is threatening to become a regional issue.

UN rights chief Michelle Bachelet called for a full investigation into the report of mass killings in the town of Mai-Kadra, where Amnesty said it had "digitally verified gruesome photographs and videos of bodies strewn across the town or being carried away on stretchers".

"If confirmed as having been deliberately carried out by a party to the current fighting, these killings of civilians would of course amount to war crimes," she said in a statement.

Amnesty said it had not been able to confirm who was responsible for the killings, however witnesses blamed forces backing the region's ruling party, the Tigray People's Liberation Front (TPLF).