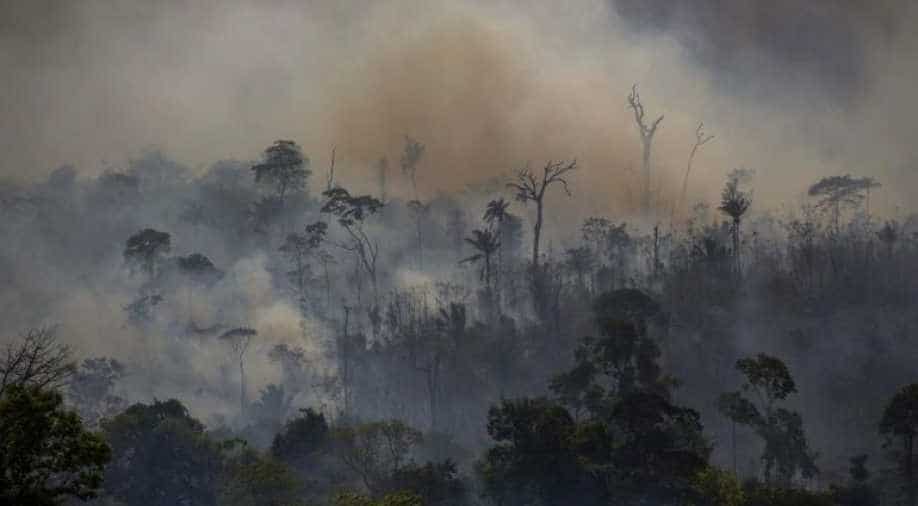 In this file photo taken on August 27, 2019 smoke rises from forest fires in Altamira, Para state, Brazil, in the Amazon basin Photograph:( AFP )

As per data from the country’s National Institute for Space Research, 6,803 fires were recorded in the month of July alone

Brazil’s Amazon rainforests have witnessed a 28 per cent increase in the number of forest fires in July compared to the same period last year.

As per data from the country’s National Institute for Space Research, 6,803 fires were recorded in the month of July alone, compared to 5,318 last year.

"Lungs of the earth" under danger

Over 60 per cent of the Amazon basin falls under Brazil. Dubbed as the “lungs of the earth”, the rainforest is crucial in limiting the impact of climate change.

However, President Jair Bolsonaro’s term has witnessed a record increase in deforestation and mining in closed forested areas, which has put scores of indigenous populations at risk. This incursion has also led to COVID-19 spreading in communities that live deep in the forests.

This is particularly worrying because usually August is when the fire season begins in the area. If the trend follows, we may witnessed record figures even this month.

Last August, a large number of forest fires ravaged parts of the rainforest.

"More than 1,000 fires in a single day is a 15-year record and shows the government's strategy of media-spectacle operations is not working on the ground," spokesman for Greenpeace, Romulo Batista said in a statement.

Most of these fires are triggered deliberately to clear land of vegetation and trees, making the process of clearing easier. A lot of this land is then used illegally to farm, mine, and to ranch.

Bolsonaro too, has been outspoken about opening up the forest to bring in more business and industries into the country. He has also often denied climate change, a common tendency among far-right leaders.

2020 has been anyway devastating for Brazil’s Amazon, with the first half witnessing the most deforestation in the region ever!

Over 3,000 square kilometres (more than 1,100 square miles) of land was cleared. This is bigger than the country of Luxembourg.

However, some positive signs have come forward recently, as scientists call for leaders to make climate change the focus of all policy, otherwise we may perish sooner than expected, and extreme weather could become the norm.

On July 16, the government issued a four-month-long ban against burning in wetland region of Pantanal and in Amazon as a whole. Additionally, the military has been sent in to ensure environment action in the region. Environmentalists do feel that a more scientific approach is required to tackle the issue. Military may effectively misplace or temporarily end illegal activity, but only through scientists can the balance be restored in the oxygen providing forests.

Just in July, NASA warned of a drought in the Amazon owing to increased temperatures in the North Atlantic Ocean surface.

Also read: Inhabitants of the Amazon basin may have cultivated plants 10,000 years ago