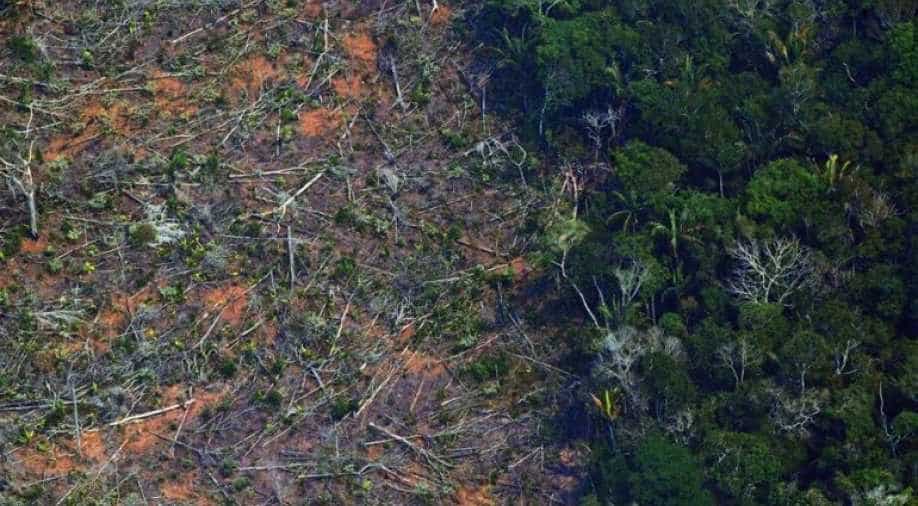 In this file photo taken on August 23, 2019 Aerial picture showing a deforested piece of land in the Amazon rainforest near an area affected by fires, about 65 km from Porto Velho, in the state of Rondonia, in northern Brazil Photograph:( AFP )

In the backdrop of global outcry over Bolsonaro government’s stance and policies on the Amazon forest, the administration recently fired a national space agency official

Amazon rainforest has been in the headlines lately owing to the record rate of deforestation in the region, which threatens local human and animal habitats, while increasing the risk of natural disasters.

Given the current scenario, it also makes tribal forest populations vulnerable to COVID-19. And these areas are hard to reach, with minimal healthcare in these regions.

In the backdrop of global outcry over Bolsonaro government’s stance and policies on the Amazon forest, the administration recently fired a national space agency official. The agency, Inpe is responsible for monitoring the rainforest via satellites, which has divulged data of mass deforestation and exploitation, even as global scientists call for preservation as an immediate call of the hour.

The data from June shows how deforestation hasn’t slowed down during the pandemic, but rather increased.

The official, Lubia Vinhas was the general-coordinator of Brazilian space agency Inpe’s Earth Observation Institute, which is one of the many sub-agencies responsible for tracking activity in the Amazon rainforest. They put out data to corroborate evidence of global warming induced by such actions.

Vinhas, who was supposed to hold her position for four years was fired by Marcos Pontes, Brazil’s science and technology minister just two years into her job. No explanation was offered for the same.

Brazil’s President Jair Bolsonaro has been a staunch critic of environmentalists, and has, on multiple occasions called for economic development in the region, which roughly implies increased deforestation. Additionally, this makes way for illegal mining and logging in the region. In fact, a recent report highlighted how illegal mining had caused the transmission of COVID-19 among tribal populations from the workers, causing major distress in the region.

A firing was undertaken along similar lines last year, and activists believe this is due to the appalling data coming in from the country.

In August 2019, when the world sought answers from Bolsonaro over the wildfires in Amazon, Bolsonaro hit out at the former head of country’s space research institute, accusing him of doctoring data in order to paint his administration in a bad light. When Galvao countered the claims publicly, he was fired and replaced.

The figures released by Inpe on Friday showed over 1,034 square kilometres worth of deforestation in June alone. This is the highest area to be cleared in June ever since data collection had been initiated in 2015.

In the January-June period, the Amazon witnessed a 25 per cent spike in deforestation, when compared to the same time last year. Over 3,069 square kilometres of land has been cleared so far.