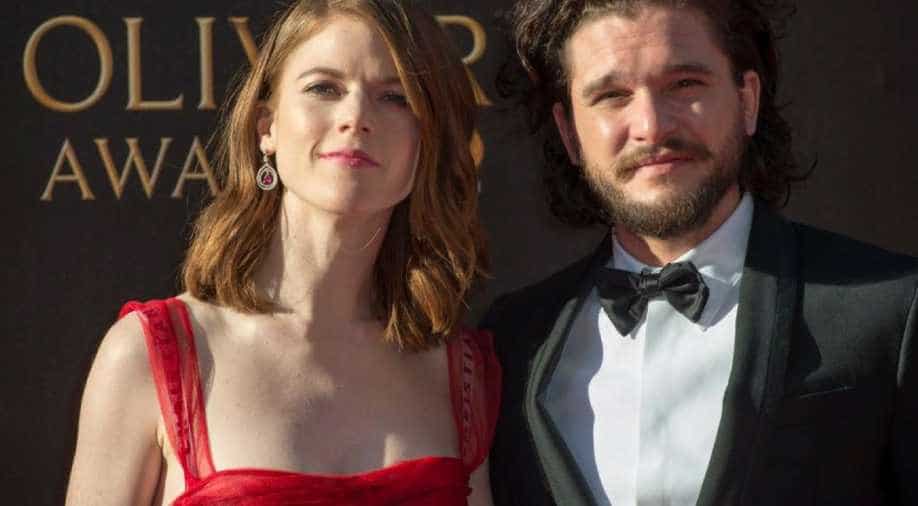 The 'GoT' actors met on the sets of the show in 2012 but reportedly split a year later. They later reconciled and officially confirmed their relationship in 2016 at the Olivier Awards in London. Photograph:( Twitter )

HBO's Game of Thrones' actors Kit Harington and Rose Leslie (who died in season 4) had earlier announced their engagement in September 2017.

The two confirmed that they would be tying the knot soon via a formal engagement in London Time's newspaper. The announcement read: "The engagement is announced between Kit, younger son of David and Deborah Harington of Worcestershire."

Also Watch: Game of Thrones and its British connection

But now it seems like we will have to wait for this royal wedding as Rose in an interview recently said that she was trying to "fit in" her wedding with the ongoing hectic schedule of GoT filming. She said, "I haven’t tackled it. There’s just too much to do.”

Earlier, Kit had revealed that he hurried up in his proposal to Rose and messed it up in the process. He was quoted: "I did have some plans to do it; I was going to string up some lights in some trees and do all the romantic stuff, but we were in the country and we were under this beautiful night sky and had a log fire burning and red wine, and...I popped my question a bit early."

Meanwhile, there is another royal wedding in the pipeline as Prince Harry will get married to Meghan Markle in May this year.