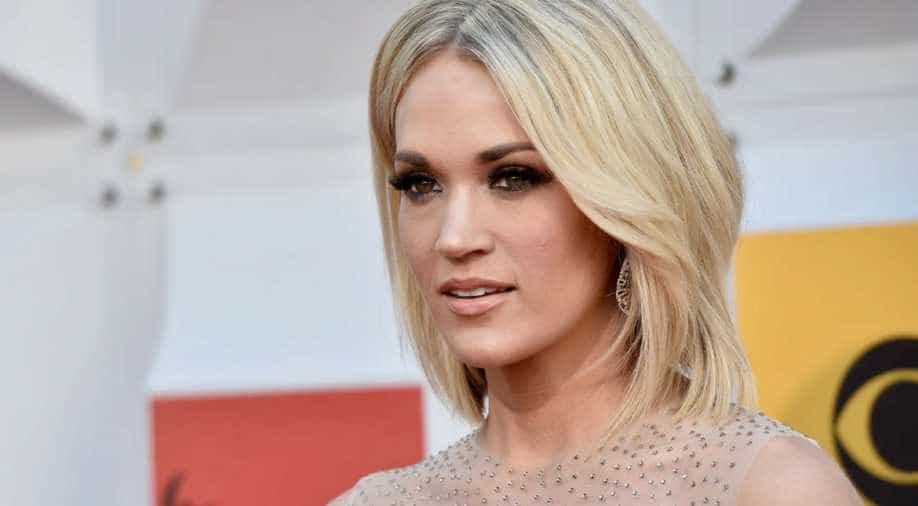 In a letter to her fan club members, the country music superstar says she received between 40 to 50 stitches on her face the night of the incident. Photograph:( Twitter )

American country music singer Carrie Underwood who charted fame after she won the fourth season of American Idol reveals that she received between 40 to 50 stitches on her face on the night of the incident.

In a letter to her fan club members, Carrie expresses concern over her "looks" and writes, "I want you all to understand why I might look a bit different".

Two days after hosting the 2017 CMA Awards in November, a representative of the singer confirmed that she took a "hard fall" on steps outside her home.  She received multiple injuries including a broken wrist and some cuts and abrasions.

She wrote in her letter:

"Most of you know that I tripped and fell and broke my wrist in November. I'm still doing regular physical therapy for that, but all is coming along. There is also another part of the story that I haven't been ready to talk about since I have still been living it and there has been much uncertainty as to how things will end up. It's crazy how a freak random accident can change your life.

"In addition to breaking my wrist, I somehow managed to injure my face as well. I'll spare you the gruesome details, but when I came out of surgery the night of my fall, the doctor told [my husband] Mike that he had put between 40 and 50 stitches in. Now, here we are 7 weeks later and, even though I've had the best people helping me, I'm still healing and not quite looking the same.

"Here we are 7 weeks later and, even though I've had the best people helping me, I'm still healing and not quite looking the same. I honestly don't know how things are going to end up but I do know this: I am grateful. I am grateful that it wasn't much, much worse. And I am grateful for the people in my life that have been there every step of the way."

"I am determined to make 2018 amazing and I want to share things with you along the way and when I am ready to get in front of a camera, I want you all to understand why I might look a bit different. I'm hoping that, by then, the differences are minimal, but, again, I just don't know how it's all going to end up."