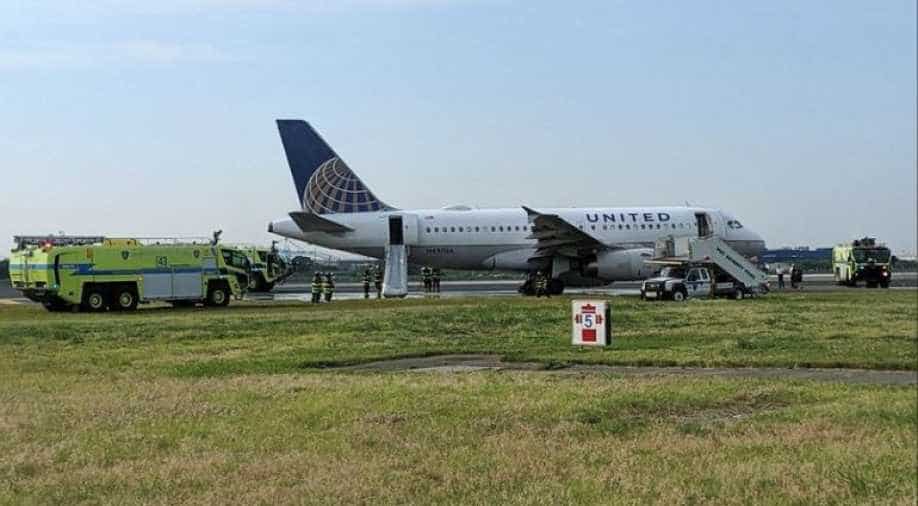 An emergency response team vehicles are seen next to the plane after its emergency landing at Newark Liberty International Airport, New Jersey U.S., June 29, 2019 in this picture obtained from social media. Photograph:( Reuters )

The Federal Aviation Administration (FAA) said the crew of the Airbus A319 reported a brake problem and that two left main tires blew out when landing.

A United Airlines flight made an emergency landing and blew out two tires at New Jersey's Newark Airport on Saturday, causing the airport briefly to suspend flights, officials said.

Flight 2098 took off from New York City's LaGuardia Airport bound for Houston and a short time later experienced hydraulic problems, prompting the emergency landing, Scott Ladd, a spokesman for the Port Authority of New York and New Jersey, said in an email.

The Federal Aviation Administration (FAA) said the crew of the Airbus A319 reported a brake problem and that two left main tires blew out when landing.

"Our pilots reacted quickly to ensure the safety of the aircraft and our customers, who deplaned using deployed slides after landing," United Airlines said in a statement, adding that there were 128 customers on board and no one was injured.

The plane was damaged and Port Authority crews had to clear the runway at Newark Liberty International Airport, Ladd said.

The FAA said it will investigate the incident.

On June 15, tires on a United Airlines Boeing 757 blew out as it landed at Newark, causing delays but no injuries.

Two planes from the same airline blowing out tires within two weeks at the same airport were just a coincidence, said aviation analyst Mike Boyd, president and chief executive officer of the Colorado-based Boyd Group International.

"It's just a different set of situations," Boyd said by phone, adding that the forced emergency landing in the latest incident was another factor.

"When a pilot wants to get a plane down, he wants to get it down and he could care less about the rubber on the wheels," Boyd said.

The incident caused delays for inbound and outbound flights at Newark, according to tracking firm FlightAware. But by Saturday afternoon, the runway where the plane made its emergency landing had been re-opened, the FAA said.

United said it was making arrangements to get the passengers aboard the plane to their final destinations.

It also issued a travel waiver for passengers, allowing any of its customers travelling to or from Newark or connecting there to make changes to their flights at no cost.