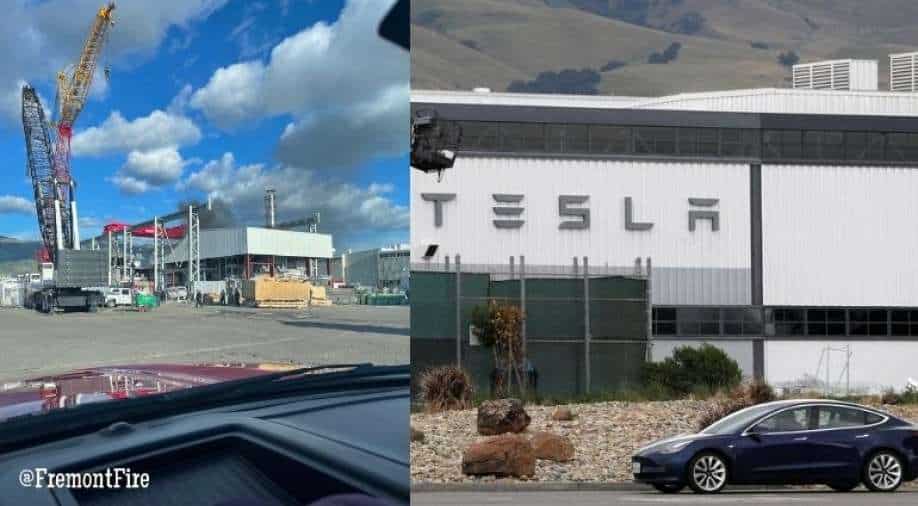 r now, the cause of the fire has been identified as molten aluminium and hydraulic fluid, with the fluid being the main source of the fire

A fire broke out at Tesla's plant in Fermont, California on Thursday afternoon around 4:30 pm.

The fire out in an area of the plant which is under construction but remained contained to a vehicle manufacturing stamping machine.

As soon as the news broke out, two fire engines were rushed to the spot who worked in coordination with the Tesla Fire Response team.

"Fremont firefighters coordinated the firefighting effort with the Tesla Fire Response Team," the Fremont fire department said in a Facebook post. "The fire is under control. Two Fremont Fire engines and one truck remain at the scene monitoring the fire."

For now, the cause of the fire has been identified as molten aluminium and hydraulic fluid, with the fluid being the main source of the fire.

The firefighters were able to contain the fire to a large extent, and one fire truck was still present at the scene "monitoring the fire".

Fremont plant is one of the main US assembly plants for the company, which is owned by SpaceX owner, Elon Musk. Tesla is also constructing another similar plant in Austin, Texas.

This plant had shut down for a bit a few days ago, too, with the reason stated as parts shortage by the owner, Elon Musk.

No Tesla or Fremont personnel was hurt in this fire.