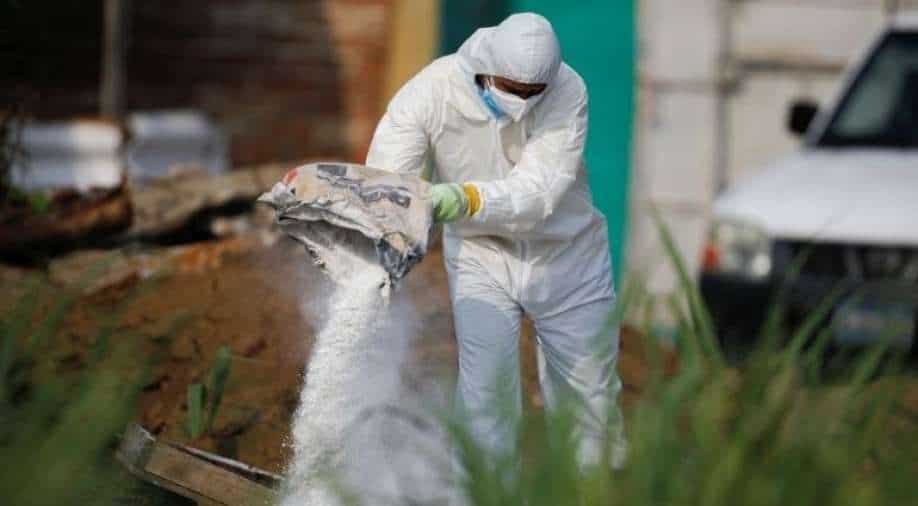 A forensic expert throws lime on discarded protective equipment used where authorities are excavating a clandestine cemetery discovered at the house of a former police officer and containing as many as 40 bodies, most of them believed to be women, in Chalchuapa, El Salvador May 20, 2021. Photograph:(Reuters)
Follow Us

The ex-cop was detained on May 8 as the main suspect in the murder of a woman and her daughter, after neighbours alerted the authorities

A team of forensic specialists on Thursday took out the remains of at least 14 people murdered and buried in the home of a former police officer who became a gang leader in western El Salvador.

Clad in full biosafety gear, the team entered the home of ex-cop Hugo Ernesto Osorio Chavez for their grisly work in the town of Chalchuapa.

Justice and Security Minister Gustavo Villatoro said that at least 14 bodies had been found buried separately at Osorio Chavez's home.

The ex-cop was detained on May 8 as the main suspect in the murder of a woman and her daughter, after neighbors alerted the authorities.

This led to police entering his home, where they began uncovering bodies.

Villatoro said that DNA samples were being collected from area residents who had a missing relative to see if it matched with any of the bodies.

The ex-police officer's home, which faces a sugar cane field, was blocked off by police, preventing reporters from entering the area.

Forensic criminologist Israel Ticas told AFP that digging will continue in other parts of the property, and estimated that the task could take more than a month.

On Wednesday a local judge ordered the arrest of 11 people linked to Osorio Chavez. The accomplices were accused of aggravated femicide and aggravated homicide.

The figure is nevertheless significantly lower than 2019, and the lowest since the end of the country's bitter civil war in 1992, according to official figures.