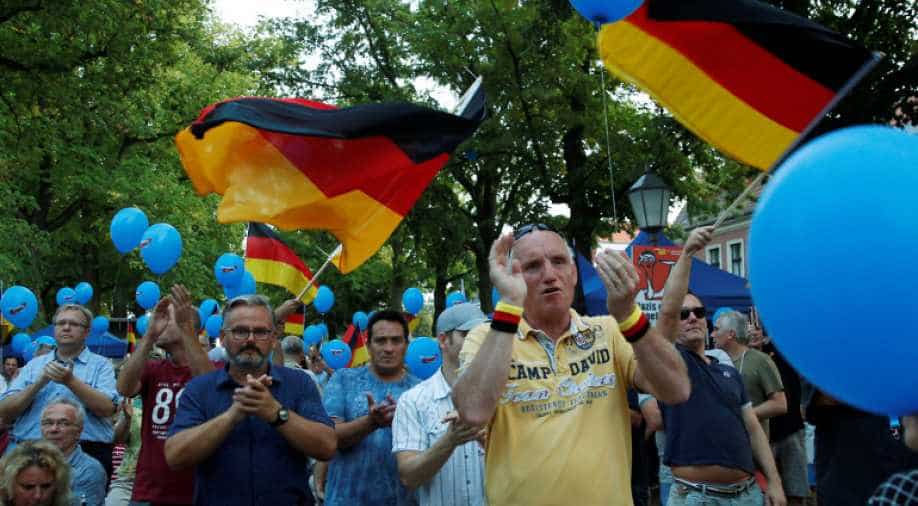 Elections in two east German states on Sunday are set to yield a surge in support for the far right and raise the pressure on conservative Chancellor Angela Merkel`s Social Democrat (SPD) coalition partners to quit her government.

Both Merkel`s Christian Democrats (CDU) and the SPD are expected to lose support to the far-right Alternative for Germany (AfD) party in Brandenburg and Saxony.

But polls show that the SPD will be the bigger losers when the voting ends at 1600 GMT. Exit polls are due then.

The AfD is harnessing voter anger over refugees and the planned closure of coal mines in the two regions and cast themselves as the heirs of the demonstrators who brought about the fall of the Berlin Wall three decades ago.

The SPD is almost tied with the anti-immigrant AfD in Brandenburg, where an unprecedented victory for the far-right party would amplify leftist voices in the centre-left party who want out of the coalition to rebuild in opposition.

The latest poll put the Social Democrats on 22%, just 1 point ahead of the AfD in Brandenburg, the state neighbouring Poland that has been governed by the SPD since German reunification three decades ago.

"Earthquake in the east, earthquake in Berlin?," headlined the Munich-based Merkur newspaper. "A resounding (SPD) defeat in the east would be grist to the mill of critics (of the coalition)."

The SPD has been run by an interim leadership team since their leader stepped down in June after painful losses in the elections for the European Parliament and support for the party nationally is at a record low of about 15%.

SPD delegates are expected to elect a new leader in December and the party has promised members to assess the partnership with Merkel`s conservatives at the end of this year.

A coalition breakdown could trigger a snap federal election before 2021, an unappealing option for the SPD given that national polls have put Merkel`s conservatives first, with the Greens close behind and the SPD trailing on a par with the AfD.

Another option would be a conservative minority government, anathema to stability-loving Germans.

To tame opponents of continuing to serve in Merkel`s government, SPD leaders could demand painful concessions from the conservatives, such as generous state pensions for low-income workers and higher taxes for the rich.

This would anger many conservatives who prefer tax relief for companies and widen cracks in an unwieldy coalition that has been weakened by disputes over asylum policy, tax and pensions.

"The coalition is no end in itself for us," Ralph Brinkhaus, conservative leader in the national parliament warned the SPD in an interview with Focus Magazine. "We as conservatives are surely not going to bend over backwards just to reach 2021."

Merkel`s CDU has widened their lead over the AfD in Saxony, where they have governed since 1990.

But support for the conservatives in the state of 4 million people on the border with Poland and the Czech Republic is expected to fall by more than 7 points to 32% as they lose voters to both the AfD and Greens.

A humiliating outcome in Saxony is likely to renew debate among conservatives about whether CDU leader and Defence Minister Annegret Kramp-Karrenbauer, aka AKK, is the right person to lead them into the next national election.

Kramp-Karrenbauer, widely seen as the most likely successor to Merkel who will not run as chancellor in the 2021 federal election, has seen her popularity slide since taking over as CDU leader last year after damaging gaffes.

"It`s going to be tough for AKK. She has to prove she is fit for the defence minister post. As CDU leader she would also be needed to deal with any SPD moves to leave the coalition," wrote the Berliner Morgenpost.

"Will her authority suffice? Her popularity is at the bottom and bad election results will lead to a discussion among conservatives about her future," the newspaper added.