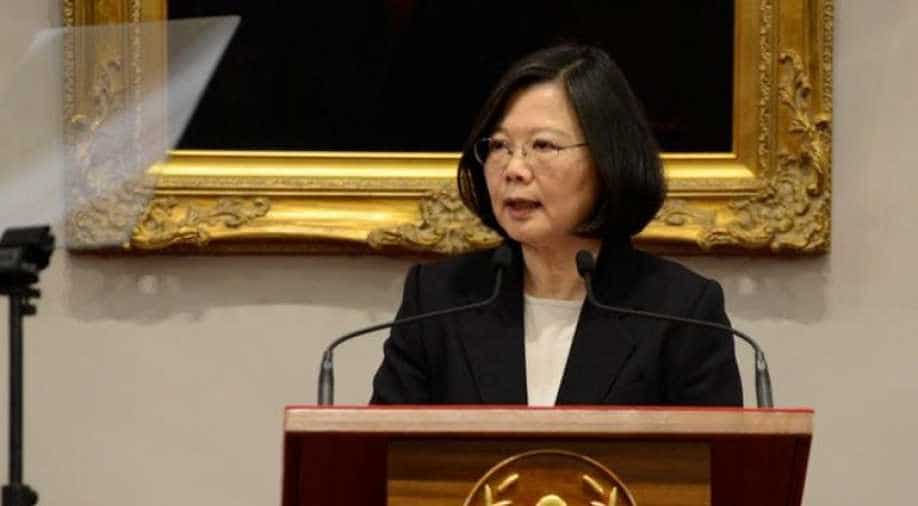 The months of anti-government protests in Chinese-ruled Hong Kong have taken centre stage in Taiwan ahead of the January 11 presidential and parliamentary elections.

Citing a letter from a young Hong Konger appealing for people "not to believe the Communists", Taiwan President Tsai Ing-wen said on Sunday the island's democratic way of life was at risk from the danger China posed to Taiwan.

The months of anti-government protests in Chinese-ruled Hong Kong have taken centre stage in Taiwan ahead of the January 11 presidential and parliamentary elections, with Tsai in particular warning Taiwan would be next if it gives into Chinese pressure and accepts Beijing's rule.

Speaking at a televised presidential debate, Tsai read excerpts from a letter she said she received from a young person in Hong Kong. She did not name the person nor say when the letter was written.

Tsai read from the letter: "'I ask that Taiwan's people not believe the Chinese Communists, don't believe any pro-Communist official, and don't fall into China's money trap.'"

Taiwan's people have been through their own traumas under martial law before adopting democracy and are now seeing "the end of Hong Kong", Tsai quoted the letter as saying.

Tsai said she wanted to read the letter to remind people of the significance of their vote next month.

"On Jan. 11, the vote in our hands can decide whether our democratic way of life of today can continue. The whole world is watching what Taiwan will do on Jan. 11."

China claims Taiwan as its own territory, to be taken under its control by force if needed. Taiwan says it is an independent country called the Republic of China, its formal name.

China says it will run Taiwan under the "one country, two systems" model - the same as used in Hong Kong - granting it a high degree of autonomy.

Tsai and her main opponent Han Kuo-yu from the Kuomintang, which favours close relations with China, have both rejected this model, though Tsai has repeatedly portrayed Han as supporting it.

Han said Tsai was "deceiving" the people of Hong Kong by using their struggle to try and win votes.

"They are bleeding from fighting against China, while you are enjoying electoral gains. Your campaign is based on the blood of Hong Kong people. You are exploiting the values they uphold," he said, citing remarks from a Hong Kong student leader who later apologised for his criticism.

Han also reiterated what has become a frequent complaint, that senior members of Tsai's Democratic Progressive Party and Tsai herself had previously been to China, accusing them of hypocrisy for denouncing a trip he made earlier this year.

"And you slam me for accepting 'one country, two systems' - this is really too much," Han said.