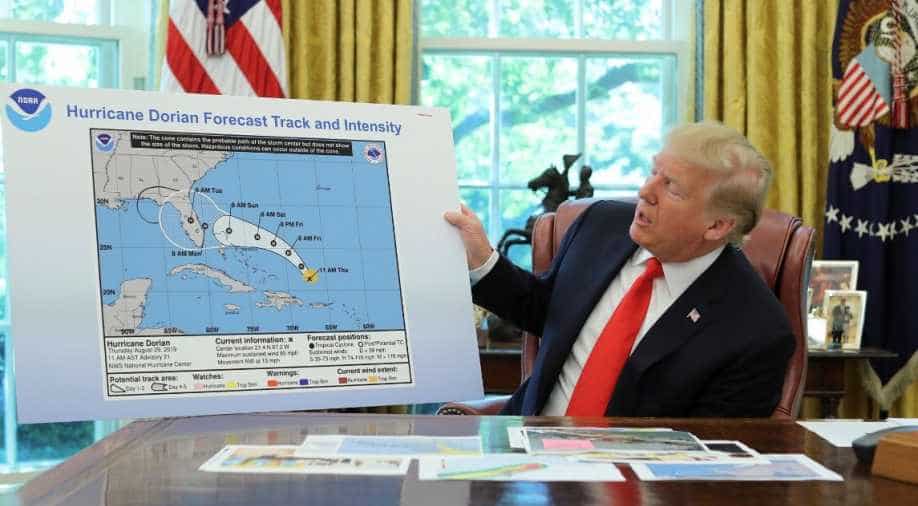 The bizarre episode has taken on an even more bizarre mascot -- a Sharpie marker used to alter a map of the storm's trajectory.

It's been six days and Donald Trump and the US media can't seem to let go of a tit-for-tat involving the danger Alabama faced during Hurricane Dorian.

The bizarre episode has taken on an even more bizarre mascot -- a Sharpie marker used to alter a map of the storm's trajectory.

Trump has insisted via Twitter to his more than 60 million followers that he was correct about the danger the southern US state had faced. He has brandished a mysteriously altered weather map in the Oval Office. He has deployed a rear admiral.

And the US media has lapped it up.

On Friday -- a day when survivors in the Bahamas and other places where the hurricane actually did hit were trying to rebuild their lives -- the US president once more took to Twitter to argue about Alabama.

The media "went Crazy, hoping against hope that I made a mistake (which I didn't)," he wrote. "Still without an apology."

The spat might seem insignificant as one of the most powerful Atlantic hurricanes on record wheels up the edge of the US east coast after pulverizing the Bahamas.

But in terms of attention given by Trump, what's become known as "Sharpie-gate" is no sideshow.

The strange tale began when Trump tweeted on Sunday that Alabama was among the states facing damage from the still approaching Dorian and would "most likely be hit (much) harder than anticipated."

Minutes after Trump's alarming tweet, the National Weather Service (NWS) counter-tweeted: "Alabama will NOT see any impacts from #Dorian. We repeat, no impacts from Hurricane #Dorian will be felt across Alabama. The system will remain too far east."

By Friday, however, the National Oceanic and Atmospheric Administration (NOAA), the agency in charge of the NWS, seemed to vindicate Trump.

"From Wednesday, August 28, through Monday, September 2, the information provided by NOAA and the National Hurricane Center to President Trump and the wider public demonstrated that tropical-storm-force winds from Hurricane Dorian could impact Alabama. This is clearly demonstrated in Hurricane Advisories #15 through #41," it said.

Furthermore, it stated, "The Birmingham National Weather Service's Sunday morning tweet spoke in absolute terms that were inconsistent with probabilities from the best forecast products available at the time."

Back down? Double down?

Opponents of Trump pounced on the topic. Trump, as he usually does, doubled down.

Over and over this week he kept talking about Alabama, even when no other officials did, and he raged at the media for pointing out that Alabama still hadn't been hit and, in fact, never had been in real danger.

On Wednesday, the back-and-forth took a still more curious turn.

In the Oval Office, Trump showed off a weather map showing an earlier -- now completely out of date -- forecast of Dorian's track that predicted the storm passing right across Florida, rather than turning up the coast.

Added to the end of the path? A large bulge, apparently drawn in black Sharpie marker, that extended the storm deep into Alabama.

Facing even more derision from TV comedians, satirists and Democratic opponents, Trump once more doubled down.

Late Thursday, the White House sent out the copy of a sombre letter by Rear Admiral Peter Brown -- Trump's counter-terrorism adviser -- saying that back on Sunday he'd been the one to brief the president on Alabama being a possible target.

On Friday, Trump accused the media of being "fixated" on the issue.

"This nonsense has never happened to another President," he said.

But the icing on the cake came in the form of an item now for purchase on the Trump 2020 campaign merchandise website: a set of "Official Donald J. Trump Fine Point Markers."

"Buy the official Trump marker, which is different than every other marker on the market, because this one has the special ability to drive @CNN and the rest of the fake news crazy! #KeepMarkersGreat," Trump 2020 campaign manager Brad Parscale tweeted.