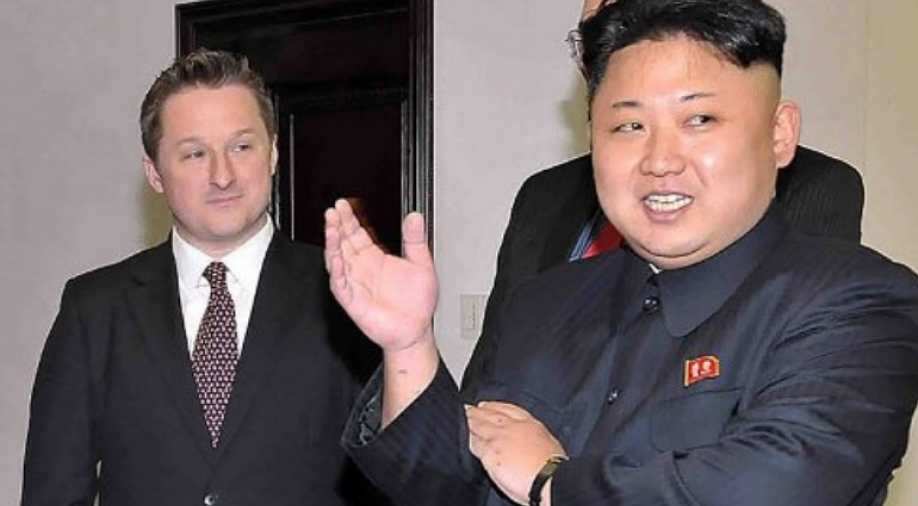 Spavor, a business consultant with deep ties to North Korea, is being investigated on suspicion of endangering state security, Chinese state media reported.

Canadian Michael Spavor has jet skied with Kim Jong Un, felt the ground shake from a North Korean nuclear test, and now it appears, been detained by Chinese authorities.

Spavor, a business consultant with deep ties to North Korea, is being investigated on suspicion of endangering state security, Chinese state media reported. The Canadian government says it has been unable to contact him and phone calls, messages and emails to Spavor went unanswered on Thursday.

When North Korean leader Kim launched a bid to engage the world and attract international investment this year, Spavor was uniquely positioned to play a role.

As one of the few Westerners with personal ties to the North Korea government and Kim himself, Spavor has been trying to drum up international interest in investing in North Korean economic projects, in anticipation of sanctions being eased amid warming ties.

Spavor is best known in the region for his relationship with Kim Jong Un, and his role in facilitating a visit to Pyongyang by American basketball star Dennis Rodman in 2013.

"That was the most amazing experience I've had in my life .. We hung out for three days," Spavor told Reuters in a 2017 interview.

Images from that time show Spavor sharing cocktails with Kim on board one of his private boats, after they had been jet-skiing in the bay next to Wonsan, one of Kim's pet economic development areas.

In 2015, Spavor was involved in efforts to attract more than $150 million in foreign funds for Wonsan, including $39 million to fund a new brewery.

The investigation into Spavor follows the detention in Beijing on Monday of former Canadian diplomat Michael Kovrig, who Chinese state media report is being investigated on the same charges.

China has reacted angrily to Canada's arrest on Dec. 1 of Chinese executive Meng Wanzhou, the chief financial officer of China's Huawei Technologies, and Spavor's investigation is likely to further escalate the diplomatic row.

Now based in the border city of Dandong in China, Spavor has been cultivating ties between potential Chinese investors and North Korean officials.

Spavor's experience with North Korea dates to at least 2001. In 2005, he lived in Pyongyang for several months teaching at a school run by a Canadian non-governmental organisation, according to the website for his organisation, Paektu Cultural Exchange.

Since then he's mastered the Korean language - with a distinctly North Korean accent - and maintained regular contact with many people in North Korea, including Kim Jong Un.

Spavor's contacts in the isolated and tightly controlled nation have allowed him access when other outsiders were blocked.

In February, North Korea barred most foreign media from covering a large military parade in downtown Pyongyang. Spavor was front and centre in the parade area, streaming online video of tanks rolling by as North Koreans celebrated.

Gregarious and affable, Spavor is a fixture in the small community of North Korea watchers, with analysts and journalists often seeking his rare insight into the country.

Spavor keeps a number of photos of his meetings with Kim on his phone, and describes the North Korean leader as charismatic and smart.

But Spavor also is discrete about his contacts with the controversial regime, declining to comment on politics and noting that his work focuses on cultural and business ties.

"For me, encouraging these sports engagement events, these nonpolitical friendship interactions, promoting these kind of events can show people that Americans and Koreans can get along very well," he said in the 2017 interview. "I guess if we can continue to increase these exchanges, then we hope that has an effect on politicians too."

But North Korea's weapons programmes in defiance of U.N. resolutions and dismal human rights reputation has always been a lingering presence.

In September 2017, Spavor was among those in the Chinese border city of Yanji who said they felt the jolt from North Korea’s sixth and most powerful nuclear test.

Spavor told Reuters at the time he was eating brunch when he felt the building shake for about five seconds, before the city's air raid sirens sounded.

Ahead of a major publicity push by North Korea around its foundation day events in early September, Spavor told Reuters he was taking dozens of Chinese investors and entrepreneurs into North Korea to "attend matchmaking sessions with various government officials and stakeholders as well as visiting existing and future development zones".

There have been some signs that enforcement of sanctions has eased amid diplomatic outreach, but Washington has said sanctions will remain in force until more progress is made toward denuclearising North Korea.

When asked about the sanctions in September, Spavor said his clients "are aware of the current sanctions and are waiting for potential investment projects and other business for when the Chinese government gives the green light on business as usual."

In his latest posts on social media on Monday, Spavor said he was on his way to the South Korean capital of Seoul for new consulting work and meetings with friends.

His friends say he never arrived.