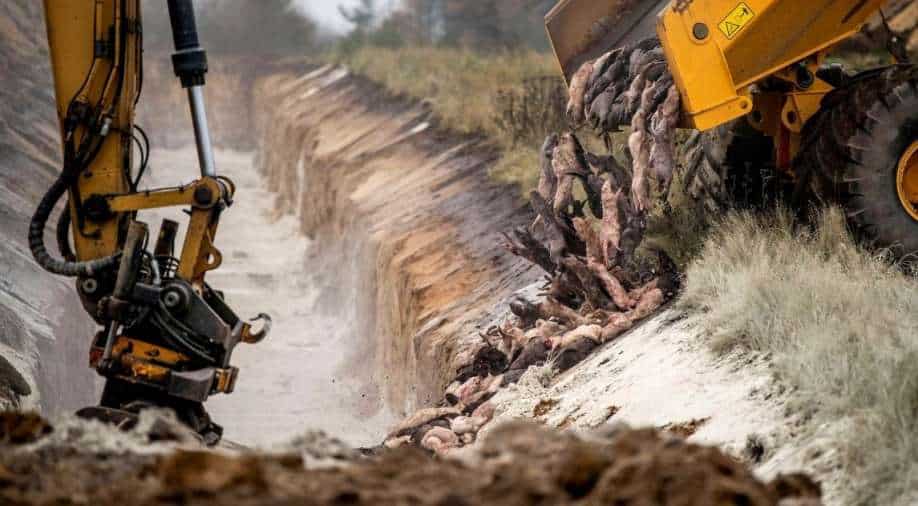 Denmark is facing a new horror, as cadavers of the culled minks have re-emerged from the earth, as per footage from local channels

Denmark's government said on Friday it wants to dig up mink that were culled to prevent the spread of the coronavirus, after some resurfaced from mass graves.

Denmark is facing a new horror, as cadavers of the culled minks have re-emerged from the earth, as per footage from local channels.

The macabre phenomenon was observed in a military training field outside the western town of Holstebro, where thousands of minks had been put into an improvised mass grave. Newspapers have referred to them as the "zombie mink".

Also read: Back from dead? Zombie minks rise from graves to 'exact revenge' after being culled

Calling it a natural phenomenon, the local police said they ''got lifted by pressure from gases released by the decomposition.''

Denmark had ordered all farmed mink to be culled early this month after finding that 12 people had been infected by a mutated strain of the virus that causes COVID-19, which passed from humans to mink and back to humans.

The decision led to 17 million animals being destroyed and to the resignation last week of Food and Agriculture Minister Morgens Jensen, after it was determined that the order was illegal.

Jensen's replacement, Rasmus Prehn, said on Friday he supported the idea of digging up the animals and incinerating them. He said he had asked the environmental protection agency look into whether it could be done, and parliament would be briefed on the issue on Monday.

The macabre burial sites, guarded 24 hours a day to keep people and animals away, have drawn complaints from area residents about possible health risks.

Authorities say there is no risk of the graves spreading the coronavirus, but locals worry about the risk of contaminating drinking water and a bathing lake less than 200 metres away.

Earlier, Denmark's Prime Minister Mette Frederiksen broke down on Thursday when visiting a mink farmer who lost his herd following the government's order this month to cull all 17 million mink in the country to curb the spread of coronavirus.

Frederiksen has faced opposition calls to resign and a vote of no confidence in parliament after an order by the government in early November, which it later admitted was illegal, to cull the country's entire mink population.

The order was given after authorities found COVID-19 outbreaks at hundreds of mink farms, including a new strain of the virus, suspected of being able to compromise the efficacy of vaccines.

"We have two generations of really skilled mink farmers, father and son, who in a very, very short time have had their life's work shattered," Frederiksen told reporters after a meeting with a mink farmer and his son at their farm near Kolding in Western Denmark.

"It has been emotional for them, and... Sorry. It has for me too," Frederiksen said with a wavering voice, pausing for breath in between words.

The move to cull Denmark's entire mink population, one of the world's biggest and highly valued for the quality of its fur, has left the government reeling after it admitted it did not have the legal basis to order the culling of healthy mink.

After a tumultuous couple of weeks since the order was given on Nov. 4, the Minister of Agriculture, Mogens Jensen, stepped down last week after an internal investigation revealed a flawed political process.

Denmark has proposed a ban on all mink breeding in the country until 2022. Tage Pedersen, head of the Danish mink breeders' association, said this month the industry, which employs around 6,000 people and exports fur pelts worth $800 million annually, is finished.

Denmark's opposition says the cull of healthy mink should not have been initiated before compensation plans were in place for the owners and workers at some 1,100 mink farms.