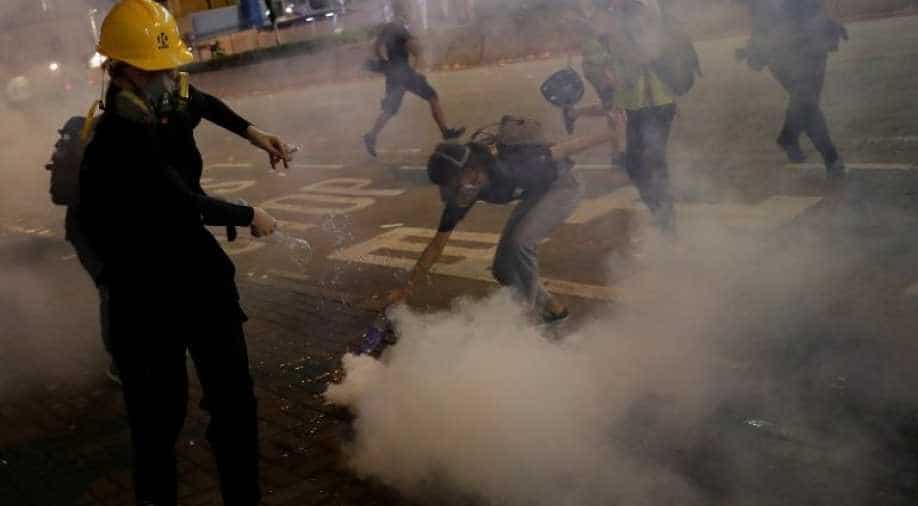 Clashes have broken out between police and hardcore protesters but the movement has won few concessions from Beijing or the city's unelected leadership.

Hong Kong democracy activists are hoping to get out a huge crowd later Sunday in a bid to show the city's leaders that their protest movement remains defiant despite increasingly stark warnings from Beijing.

Ten weeks of demonstrations have plunged the international finance hub into crisis and communist-ruled mainland China has taken an increasingly hardline tone, including labelling the more violent protester actions "terrorist-like".

Clashes have broken out between police and hardcore protesters but the movement has won few concessions from Beijing or the city's unelected leadership.

The images damaged a campaign that until then had largely only targeted the police or government institutions, and prompted some soul-searching among protesters.

China's propaganda apparatus seized on the violence, with state media churning out a deluge of damning articles, pictures and videos.

State media also ran images of military personnel and armoured personnel carriers across the border in Shenzhen, prompting the United States to warn Beijing against sending in troops, which analysts say would be a reputational and economic disaster for China.

In the aftermath of Tuesday's airport chaos, some protester groups apologised and vowed to hold a huge rally on Sunday.

Billed as a "rational, non-violent" protest, it is being organised by the Civil Human Rights Front, a group that eschews confrontations with police and was the driving force behind record-breaking rallies in June and July that saw hundreds of thousands of people hit the streets.

During smaller protest marches on Saturday -- which ended without the kind of largescale clashes that have become so commonplace each weekend -- many protesters chanted "See you in Victoria Park!" as they left the streets.

The park has long been used as the staging point for the city's years of democracy protests and will host Sunday's demonstration.

Police have given permission for the rally to go ahead but banned a proposed march.

Previous bans in recent weeks have simply been ignored by protesters and have soon led to clashes with riot police.

The protests were sparked by opposition to a plan to allow extraditions to the mainland, but have since morphed into a wider call for democratic rights in the semi-autonomous city.

But many Hong Kongers feel those freedoms are being eroded, especially since China's hardline president Xi Jinping came to power.

In the last two months, millions of people have hit the streets while clashes have broken out between police and small groups of hardcore protesters.

Battles between police firing tear gas and rubber bullets -- and hardcore protesters using rocks, Molotov cocktails and slingshots -- have since become routine in a city once renowned for its stability.

But protesters remain unbowed, despite the arrests of more than 700 people and 11 consecutive weekends of rallies that have won few concessions.

A day later the "Big Four" accountancy firms scrambled to distance themselves from an advert placed in a newspaper purportedly by employees saying they supported the protests.