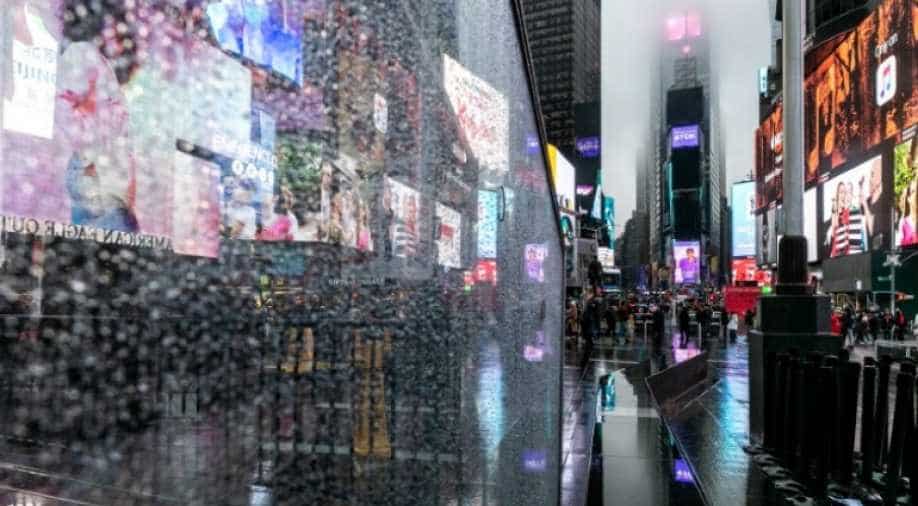 Pedestrians walks in the rainy day at Time Square in the Manhattan borough of New York City, New York, US. Photograph:( Reuters )

The arctic blast of frigid air has followed a January storm that dumped more than a foot (30 cm) of snow and sleet across the Northeast, which started melting Sunday.

Winter winds brought extreme cold and ice-slicked roads to the Midwestern and Eastern United States on Monday, with the US Martin Luther King Jr. Day holiday and an ongoing government shutdown allowing many to heed official advice to stay indoors.

The arctic blast of frigid air has followed a January storm that dumped more than a foot (30 cm) of snow and sleet across the Northeast, which started melting Sunday.

In a Chicago suburb, a 12-year-old girl died after a snow fort she had built after church on Sunday collapsed on her, according to the Arlington Heights Police Department. A 9-year-old girl she was playing with was treated for hypothermia after being dug out of the snow and was expected to survive, police said.

"This is definitely dangerous, life-and-death kind of weather happening," Chenard said. "Minnesota and Wisconsin will see temperatures in the negative 20s."

"Boston will be just 3 degrees (Fahrenheit) this morning, with wind chills of minus 12 or more," he said. "New York City and DC will be in that same range, maybe hitting the teens later today. It'll be a record or near-record cold."

The NWS issued wind-chill advisories and warnings for more than 10 states, from North Dakota and to East Coast metropolitan centers.

High temperatures for Monday are forecast at 17 Fahrenheit (minus 8 Celsius) for New York City and 12 F (minus 11 C) for Boston.

Many Americans had the day off work on Monday, either because of the holiday or because they are among the furloughed federal government workers who find themselves in the longest shutdown in US history, caused by an impasse over funding US President Donald Trump's plans to build more barriers on the US-Mexico border.

More than 7,500 flights were delayed, mostly in New York and New England, according to FlightAware.com, down from more than 14,000 on Sunday.

Tuesday's weather will be only slightly warmer, Chenard said, with temperatures reaching the low 20s Fahrenheit in the Northeast.