Iraq: Undeterred protests after 23 die in attack on protesters camp 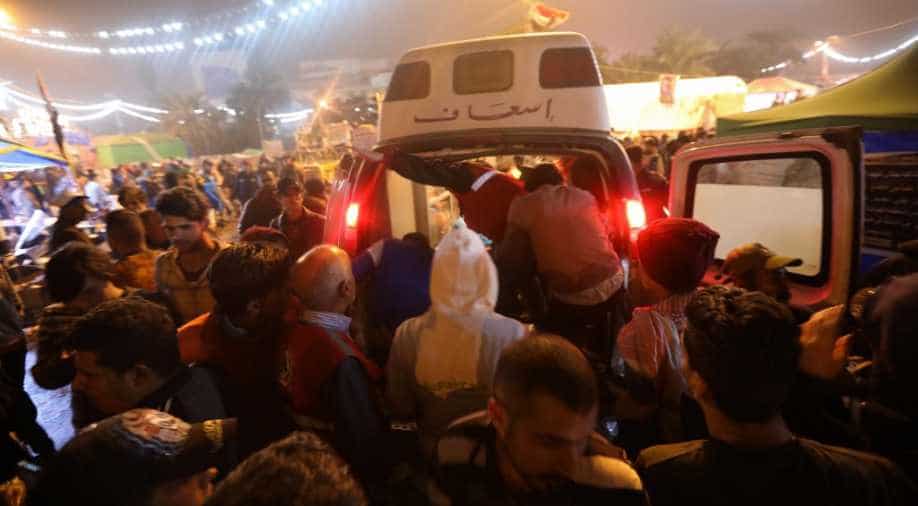 An ambulance parked at the place of attack on protesters in Baghdad in Iraq Photograph:( AFP )

The unrest in Iraq took another worrying turn on Saturday when an armed drone targeted the home of Iraqi cleric Moqtada Sadr, whose supporters condemned Friday's attack.

The anti-regime demonstrators remained defiant and continued their protests in Iraq's capital and south on Saturday despite the death toll in the overnight attack on the protesters camp jumping to 23.

The unrest in Iraq took another worrying turn on Saturday when an armed drone targeted the home of Iraqi cleric Moqtada Sadr, whose supporters condemned Friday's attack.

More than 127 anti-government protesters were wounded in the stabbing and firing incident near the Tahrir square in Baghdad, sources said. Three cops were also killed in the incident.

Late on Friday, a group of armed men in pick-up trucks attacked a large building, which is one of the main protest camps, killing 14 people. More than 40 people were wounded on Friday near Baghdad's Al-Sinek bridge.

The violence on Friday has taken the overall death toll past 440 and nearly 20,000 injured, as per an AFP tally compiled from medics, police and a national rights commission.

Young men prayed over an Iraqi flag in central Baghdad for those who lost their lives on the late-night attack on the previous night. The mourners also sobbed heavily, their shoulders shaking. "They fired intensely, mercilessly on the protesters," one witness said.

After Friday's violence, the demonstrators urged support for their movement through social media. Many of the new demonstrators are from Saraya al-Salam (Peace Brigades), a group headed by Sadr.

Sadr, who earlier backed the current regime, showed his support to the protests. Witnesses said that Sadr's supporters were present in large numbers in the Tahrir square before Saturday morning.

The sources also said that Sadr is in Iran currently, adding only the external wall was damaged in the drone attack.

Dozens of Sadr's supporters gathered around his house after the attack and chanted slogans "we're all your soldiers" while waving Iraqi flags and cleric's picture.

Thousands of demonstrators have occupied Tahrir square and nearby bridges for weeks, demanding a complete change in the current political system.

Following Saturday's attack, truckloads of armed men blocked the main road near Tahrir square on Saturday, firing weapons and shouting, witnesses said. After this incident, the army personnel were deployed on the street.

In Nasiriyah in south, the usual gathering of massive crowds was observed as the demonstrators expressed solidarity with the victims of the violence on Friday.

Reacting on the attack on the protesters, President Barham Saleh called on authorities to "identify the criminals and bring them to justice".

Over two months have passed since the unrest first began in Iraq which forced Iraqi prime minister Adel Abdul Mahdi to resign a week ago.