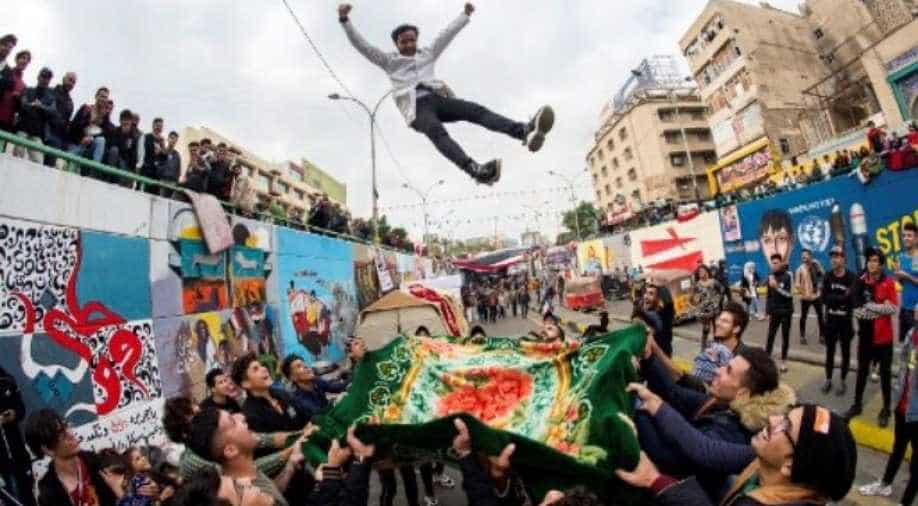 A young Iraqi protester is blanket-tossed into the air by fellow demonstrators as anti-government rallies continue in Tahrir Square in the capital Baghdad, on December 3, 2019. As anti-government demonstrations in Iraq's capital and Shiite-majority south enter their third month, they are being turned into plays, paintings, poems and literature. Tahrir square has become an art hub, a rare space for free expression in a country where conservative tribes, paramilitary forces and powerful politicians have at various points tried to snuff out criticism. Photograph:( AFP )

The Hashed had backed the Iraqi government but after a dramatic intervention by Sistani last week, it dropped its support. The embattled prime minister, Adel Abdel Mahdi, resigned at the weekend.

The men arrived in Tahrir (Liberation) Square in apparently coordinated marches from different parts of the capital, waving sticks, Iraqi flags and the logo of the Hashed al-Shaabi armed network.

Some carried portraits of Hashed fighters killed in fighting against jihadists as well as pictures of the country's top Shiite cleric, Grand Ayatollah Ali Sistani.

The Hashed had backed the Iraqi government but after a dramatic intervention by Sistani last week, it dropped its support. The embattled prime minister, Adel Abdel Mahdi, resigned at the weekend.

Many units within the Shiite-majority force have been trained or equipped by Iran.

The demonstrators occupying the square for weeks have explicitly criticised Iran for backing an Iraqi political elite they see as corrupt and inept.

They have insisted that all current figures in power are tainted with graft and have been wary of political parties seeking to coopt the youth-dominated movement.

The new arrivals on Thursday mixed in with thousands of other protesters in the square, who appeared worried although no confrontation or skirmishes took place.

"They've ruined it," one protester said, as another muttered, "It's going to get messy."

Mass rallies have rocked the capital and Shiite-majority south since early October, first denouncing government graft and a lack of jobs before moving to broader demands for deep-rooted regime change.

Nearly 430 people have been killed and 20,000 wounded since demonstrations erupted, according to an AFP toll compiled from medics, police and a national commission.

The victims' families have been demanding justice for their loved ones, and many of them hit the streets of Iraq's southern Diwaniyah on Thursday.

They joined thousands of other protesters, mostly teachers and students taking part in a general strike, AFP's correspondent said.

"The authorities are putting off the issue of who killed our sons and brothers in the protests," said Assaad Malek, whose brother died in protest-related violence.

"They should take a tough stance and severely punish the officers and SWAT forces who killed my brother," he added.

A verdict for security force members accused of violence against protesters in Diwaniyah was scheduled for Thursday, but the session was indefinitely postponed.

In the southern hotspot of Nasiriyah, hundreds hit the main protest camp in the city centre, joined by delegations from the province's powerful tribes.

Tribal dignitaries intervened last week to tamp down tensions between protesters and security forces after more than two dozen people were killed in a bloody crackdown.