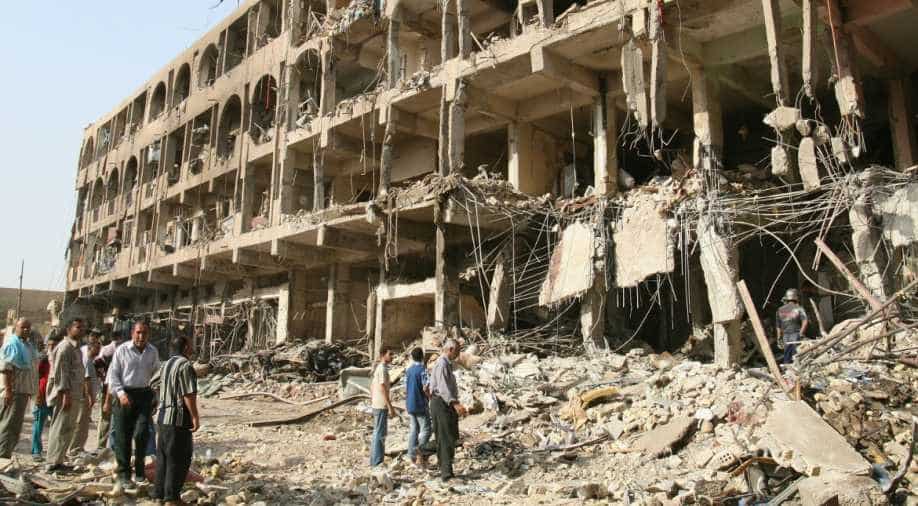 A truck-refrigerator packed with explosives blew up in Karrada, area where many go to shop ahead of Ramzan, killing 80. Photograph:( Getty )

Nearly 120 people were killed and 200 wounded in two bombings overnight in Baghdad, most of them in a busy shopping area as residents celebrated Ramzan, police and medical sources said on Sunday.

The attack on the shopping area of Karrada is the deadliest since US-backed Iraqi forces last month scored a major victory when it dislodged Islamic State from their stronghold of Fallujah, an hour's drive West of the capital. It is also the deadliest so far this year.

Prime Minister Haider al-Abadi had ordered the offensive after a series of deadly bombings in Baghdad, saying Fallujah served as a launchpad for such attacks on the capital. However, bombings have continued.

A convoy carrying Abadi who had come to tour the site of the bombings was pelted with stones and bottles by residents, angry at what they felt were false promises of better security.

A refrigerator truck packed with explosives blew up in the central district of Karrada, killing 115 people and injuring at least 200. Islamic State claimed responsibility for the attack in a statement circulated online by supporters of the ultra-hard line Sunni group. It said the blast was a suicide bombing.

Karrada was busy at the time as Iraqis eat out and shop late during the Muslim fasting month of Ramadan, which ends next week with the Eid al-Fitr festival.

Videos posted on social media showed people running after the SUV convoy of Abadi as he departed Karrada after touring the scene, throwing pavement stones, bottles of water, empty buckets and slippers, venting their anger at the inability of the security forces to protect the area.

Another video posted on social media showed a large blaze in the main street of Karrada, a largely Shi`ite district with a small Christian community and a few Sunni mosques.

Reuters TV footage taken in the morning showed at least four buildings severely damaged or partly collapsed, including a shopping mall believed to be the target, and gutted cars scattered all around.

The toll climbed during the day as rescuers pulled out more bodies from under the rubble and people succumbed from their injuries.
Comments posted on social media accused security forces of continuing to use fake bomb detectors at checkpoints filtering traffic in Baghdad, five years after the scandal broke out about a device commonly known as the `magic wand`.

A police officer in Baghdad confirmed these hand-held ADE 651 detectors were still in use. They were sold to Iraq and other nations by a British businessman who was jailed for 10 years in 2013 in the United Kingdom for endangering lives for profit.

AL SHAAB ATTACK
In a second attack, a roadside explosive device also blew up around midnight in a market in al-Shaab, a Shi'ite district in the North of the capital, killing at least two people, police and medical sources said.

Iraqi forces on June 26 declared the defeat of IS militants in Fallujah, a historic bastion of Sunni insurgency, following a month of fighting.

Now the militants were "trying to compensate for their humiliating defeat in Falluja," said Jasim al-Bahadli, a former army officer and security analyst in Baghdad.

"It was a mistake for the government to think that the source of the bombings was restricted to just one area," he said. "There are sleeper cells that operate independently from each other."

Fallujah was the first Iraqi city to fall to Islamic State in January 2014. Abadi said the next target of the Iraqi forces is Mosul, the de facto capital of the militants and the largest city under their control in both Iraq and Syria.