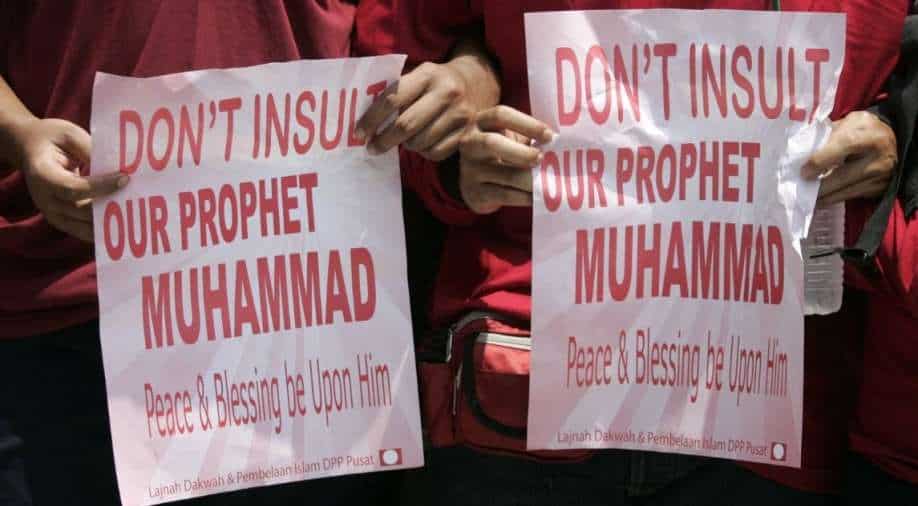 Muslim protesters hold placards during a demonstration against Swedish artist Lars Vilks, whose sketch had shown the Prophet Mohammad with the body of a dog, outside the Swedish embassy in Kuala Lumpur Photograph:( Reuters )

On its website, the party launched a fundraiser to 'publish advertisements with the drawings of Charlie Hebdo in Danish newspapers'

Danish far-right party on Friday announced a campaign to republish cartoons depicting the prophet Mohammed that a French teacher showed students before being killed, but local media were hesitant.

Pernille Vermund, leader of Nye Borgerlige (The New Right) said "The killing of Samuel Paty triggered the campaign, we want to show our support for his family and for freedom of speech."

On its website, the party launched a fundraiser to "publish advertisements with the drawings of Charlie Hebdo in Danish newspapers."

The anti-immigration party holds four out of the 179 seats in the Danish parliament.

In Danish media circles, the initiative was greeted with mixed responses.

Poul Madsen, editor of tabloid Extrabladet said they would only decide on the advertisements when they saw them and "not before."

"We condemn Muslim terrorism and 100 percent support France, the murdered and freedom of speech but always with careful regard to our employees and those especially vulnerable," Madsen posted on Twitter.

Vermund said she was "not at all certain it will be possible" to publish the drawings.

"But as a politician, my obligation is that the development of society goes towards more freedom of speech not less," she said.

Cartoons depicting the prophet Mohammed were published by Danish daily Jyllands-Posten in 2005, leading to widespread protests and anger among many Muslim communities, to whom depictions of the prophet are forbidden.

The French satirical weekly Charlie Hebdo, like other European newspapers, then republished them in 2006 in defence of freedom of speech.

In 2015, the newspaper was the target of a jihadist attack that killed 12 people, among them journalists and cartoonists.