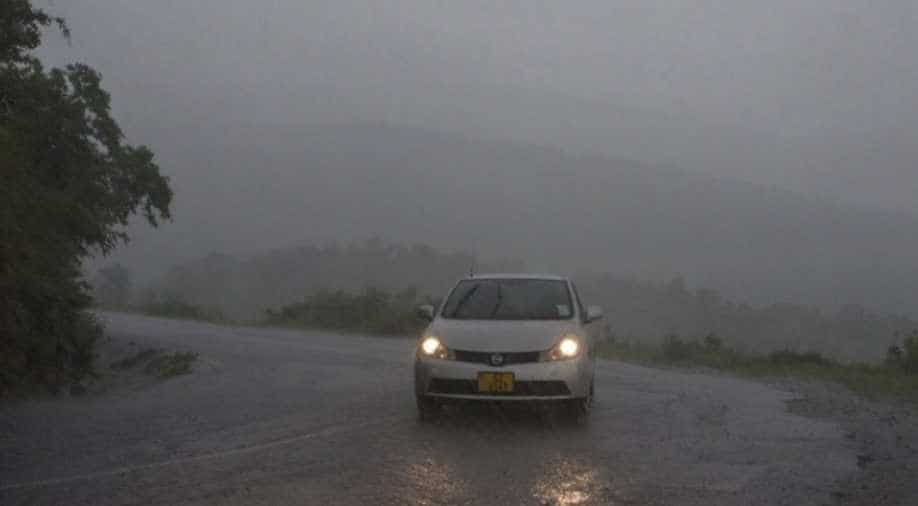 File photo: This picture taken on March 15, 2019 shows a vehicule as rain, which is believed to be the beginning of Tropical cyclone Idai coming from central Mozambique. Photograph:( AFP )

Cyclone Idai, which brought floodwater and destruction to areas of Mozambique and Malawi, hit Zimbabwe on Friday, cutting off power and communications.

At least 31 people have died in eastern Zimbabwe while dozens were missing as homes and bridges were swept away by a tropical storm, state television reported on Saturday.

Cyclone Idai, which brought floodwater and destruction to areas of Mozambique and Malawi, hit Zimbabwe on Friday, cutting off power and communications.

Pictures shared on Twitter and television footage showed roads, houses and bridges that were washed away while communication towers were knocked down and electricity cables blocked roads in Chimanimani district, 410 kilometres (255 miles) east of the capital Harare.

State television ZBC said 31 people had died in the district while more than 70 people were missing.

The information ministry said the army had moved in to rescue 197 pupils trapped at a local school.

"This a very challenging operation as it's being undertaken as a ground effort because of unsafe weather conditions for air efforts," the ministry said in a statement.

Joshua Sacco, a member of parliament in Chimanimani earlier told Reuters the district had been cut off from the rest of the country as the storm left a trail of destruction reminiscent of Cyclone Eline in February 2000, which devastated southern Zimbabwe.

Sacco said the death toll was expected to rise as rescue efforts continued.

Chimanimani, which borders Mozambique, has been worst affected, with the storm causing floods as well as destroying crops and plantations, Zimbabwe's Ministry of Information said.

Air force helicopters were rescuing people, but flights were being slowed by heavy winds.

Zimbabwe has faced a severe drought this year that has damaged crops and a United Nations humanitarian agency says 5.3 million people will require food aid.

The country's meteorological services expect rains to continue throughout the weekend.